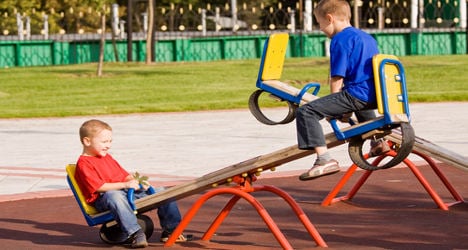 Marie-Claude Lerue was shocked last weekend when police showed up at her house and then horrified when she realized the officers were there for her 6-year-old son.

The police in the small village of Gespunsart near the Belgian border had a summons ordering the boy to the police station for interrogation about a playground game turned fight that left a girl with bruises, French newspaper L’Union reported.

“Aren’t you ashamed of hauling kids to the police station for questioning,” the woman’s partner, Cyril Girard demanded of the officers.

In all five boys we summoned by the police for the incident at school in March.

The little girl’s mother says the boys are no innocents. The group had set upon her daughter, kicking her while she was on the ground, leaving her with a 10-centimetre bruise, she said. Here's the boy who the police wanted to question. (Screengrab/L'Union)

“It’s not the first time, this has been going on since school started. We already contacted the principal, we also went to see her, nothing changed,” the unidentified mother told L’Union. “I had a doctor look at the bruises and then I reported it to the police.”

For their part the police said they had to bring the kids in for questioning because a criminal complaint had been filed.

“I understand it could sound shocking to question such young kids. But as soon as a complaint’s been filed, we have to interview the possible perpetrators,” said local police commander Johanna Di Pietro.

While everyone is fairly riled up by the case, all sides agree the school needs to do a better job of keeping an eye on the kids. There are only three adults on the playground for roughly 36 kids.