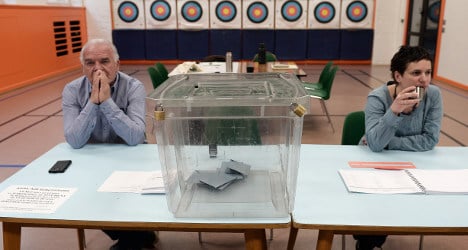 Here's why you have to vote in the EU elections. Photo: Frederick Florin/AFP

With just a matter of days until the May 25 European Elections, France is not exactly gripped with electoral fever.

Though the European Union wields a €960 billion budget and has ever increasing powers across the continent, recent polls have put expected turnout below the 40.6 percent voted in 2009. The turn out for EU expats living abroad is expected to be even lower.

The lack of European election fever in France is visible in small details such as the dozens of empty metal billboards posted outside Town Halls and voting places, that are normally plastered with campaign posters. Many smaller parties have decided it’s not worth printing the posters this year.

The low interest is not a surprise, Pascale Joannin, director of the pro-EU think tank the Robert Schuman Foundation, tells The Local. People don’t fully grasp the impact of the EU because when they hear about it, which is rare, it is usually being blamed by politicians when things don't go their way, Joannin says.

“It’s politicians' jobs to explain the EU rather than criticizing Europe, every time there's a decision they don't like. Unfortunately we have too many presidents or prime ministers who come home from Brussels and say, “It’s the EU’s fault,’” she said. “Once, twice, three times and then the French people start to think the EU is a kill joy.”

Yet voters will be the final arbiters of who will take up France’s 74 seats for the next five years in the 751-member European parliament. And while many will stay away from the ballot boxes there is actually a lot more at stake than they may realize.

Here are five reasons why voters should cast ballot this year:

1) The EU Parliament has a lot more power than it used to: Since 2009 it has become, in partnership with the European Commission, fully responsible for the EU budget. Previously the body had decision making powers over some spending items, but others were mandated. “They now have discretion over the budget they didn’t have in 2009,” said Joannin.

2) Election of one Europe’s most powerful leaders: For this first time, MEPs will have a say on who might become the next President of the European Commission, who is considered  the EU’s most powerful office holder,with significant powers, including the ability to introduce new legislation. The EU parliamentary groups have agreed that their choice of candidate for president will be drawn from the bloc that wins the most seats, which is where the voters come in.

Although national governments have the ultimate say in choosing the president of the European Commission, in theory they are likely to chose the nominee put forward by parliament or risk a clash with parliament and a "crisis of democracy".

At the moment the race to succeed current president Jose Manuel-Barroso seems a straight fight between the former Luxembourg Prime Minister Jean-Claude Juncker and German Politician and President of the European Parliament Martin Schulz.

3) A chance to say no to more austerity: This is the first EU parliamentary election since the darkest days of one the worst economic crisis to ever hit Europe. The crisis has prompted some member nations like Greece to be forced into billions of euros in austerity cuts at the hands of the the EU in exchange for bailout money. The elections are an opportunity for voters to show if they agree with the EU's ongoing policy of austerity.

4) It’s voters only direct say on the EU’s leadership: One of European citizens' most common critiques of the EU is the feeling of the “democratic deficit” in the union’s operations. The vast layers of bureaucracy, including the European Commission, is composed of appointed leaders who oversee some 33,000 workers. But members of European Parliament are the only EU officials directly elected by European citizens, so we might as well have a say in who they are.

5) The rise of extremist groups across Europe: Between 15 and 30 per cent of seats in the new parliament could go to anti-EU parties on the far left and right, some of whom are intent on stopping the EU from working and basically wrecking it from within.

The latest polls shows France’s anti-immigration, anti-EU National Front either neck-and-neck with or on track to beat the centre-right UMP and the Socialists in terms of the number of seats captured. National Front leader Marine Le Pen has said previously the only way to improve the European Union is by “exploding it.”

She plans to unite with various far right parties from across Europe, who include Nazi sympathizers. These groups have more chance of winning seats if voter turnout is low. So if you are pro-EU then you might want to dig out that voting card.

SEE ALSO: Is France really a nation of Eurosceptics?