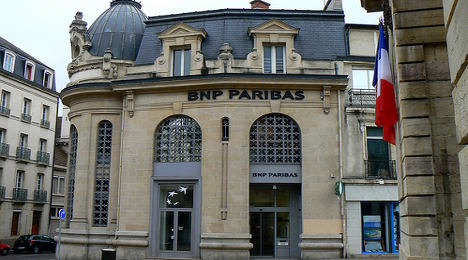 BNP looks set to pay out billions of dollars in fines to the US for breaching sanctions with Iran and Sudan, according to reports. Photo: Dierk Schaefer/Flickr

The US Justice Department said France's largest bank deliberately hid thousands of transactions with the two countries as well as Myanmar and Cuba during 2004-2012 in what officials called a "complex and pervasive scheme" that top bank managers knew broke US law.

Officials called it the largest penalty ever obtained by the Justice Department in a criminal economic sanctions case, and the largest in any criminal case involving a bank.

The violations aided countries involved in terrorism and human rights violations, Holder said, "in many cases to the detriment of United States national security."

"This outcome should send a strong message to any institution, any institution anywhere in the world, that does business with the United States, that illegal conduct will simply not be tolerated."

The bank agreed to plead guilty to one count of conspiring to violate sanctions, making it the first bank found guilty in a sanctions case.

And the bank is letting go of 13 employees, five of them top-level executives, including chief operating officer Georges Chodron de Courcel, who resigned in early June.
Violations 'permissible' in France, Europe

But the bank supervisory authority ACPR stressed that it had previously examined the liquidity and solvency of BNP and found it to be "quite solid."

BNP chief executive Jean-Laurent Bonnafe said the bank has "accepted its responsibility for its conduct" and noted that "certain employees deliberately circumvented US rules."

"Aside from these individual failings, there was also a lack of vigilance and responsiveness," Bonnafe said.

But he downplayed the violations of laws he called "complex" and that "evolve over time."

Such transactions "would have been considered permissible from a French and European regulatory standpoint," he said, but because they were dollar transactions they brought US penalties.

The details of the punishment had been widely leaked over the past weeks, and BNP said that, having already set aside €800 million ($1.1 billion) to cover the penalty, it would take another €5.8 billion charge in the second quarter.

US Assistant Attorney General Leslie Caldwell linked the severity of the penalty to both the bank's deliberate attempts to hide the activity and its non-cooperation with the investigation.

"Remarkably, BNP continued to engage in this criminal conduct even after being told by its own lawyers that what it was doing was illegal," Caldwell said.

"Not only did BNP commit severe criminal acts, but then, BNP hindered our ability to prosecute the individuals that engaged in that wrongdoing. It must now accept the criminal consequences of its actions."

Federal Bureau of Investigation Director James Comey said the punishment was also a message to shareholders to demand better behavior from corporate management. "The $9 billion is your money," he said to BNP investors.