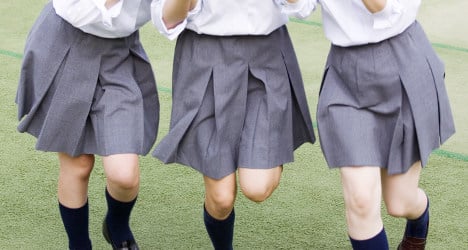 There were tense scenes outside a school in the centre of Nantes, western France, on Thursday, when around 200 supporters of the right-wing group Manif Pour Tous turned up to protest against an anti-sexism stunt set to take place on Friday.

The protest was organized soon after it emerged that education authorities in Nantes were inviting boys to wear skirts to classes in 27 high schools as part of an anti-sexism day designed  to promote equality in schools.

The thought of schoolboys wearing skirts has not been welcomed by the Manif pour Tous group, which led the protests against gay marriage back in 2013.

Protesters believe the initiative is concealing the fact that gender theory – the belief that children’s gender is not fixed at birth – is going to be taught in French schools.

It’s an accusation that has regularly been thrown at the French government in recent months, prompting ministers to make angry denials.

“In the current context, asking boys to wear a skirt is provocative. They must have a screw loose,” one protester, named Chantal, told French media.

The sight of protesters outside the gates angered some school pupils.

“They do not have the right to come to our school and monopolize our idea,” one student told French daily 20 minutes. “We ask authorities who have supported us up to now, not to give in to the pressure.”

Some pupils reacted by kissing each other while one male pupil was seen climbing onto to a wall to change into a skirt.

“I will wear a skirt to school tomorrow, just to annoy those who are against it,” said a pupil, named Simon.

The “raise your skirts” day has caused a fair amount controversy since word spread around social media this week.

Olivier Vial, president of the conservative UNI party said: “We’ll do any old nonsense in the name of equality.

“This move is inspired by the Day of the Skirt, whose original aim was to allow women to express their femininity in environments where it was often difficult. But this is just denying feminine and masculine identity,” Vial said.

Frigid Barjot, the former leader of the anti-gay marriage Manif Pour Tous movement asked the country’s education minister via Twitter: “And the girls, will they be wearing beards as well?” in a nod to bearded Eurovision winner Conchita Wurst.

Another anti-gay marriage militant Tugdual Derville tweeted: “It’s not April Fool’s Day. It’s not a wind up. In our schools, with our expensive taxes, confusion of genders.”