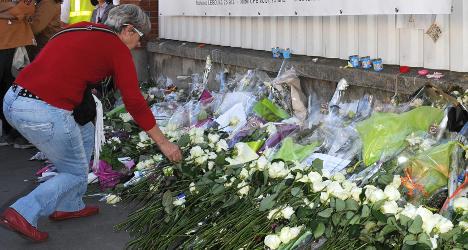 A woman puts a white rose at the end of a march by people from all faiths to remember Jewish victims of Toulouse gunman Mohammed Merah. Photo: Eric Cabanis/AFP

Around 18 million people, or 37 percent of the adult population in France, which is home to the world’s third largest Jewish population, hold some form of anti-Semitic attitude, according to a new global survey by the Anti-Defamation League.

France, which is home to around half a million Jews – far more than any other western European country – did not compare well to other European countries in ADL’s study.

Germany, where one percent of the population is Jewish, came in the middle of European countries, with 27 percent of those surveyed deemed anti-Semitic. In the UK it was eight percent, in Spain the figure was 29 percent, and in Italy it was 20 percent. In the USA it was nine percent, with the global average being 24 percent.

The study was based on a worldwide survey of 53,100 adults across 101 countries, with researchers classing respondents as anti-Semitic if they answered 'probably true' to six out of 11 statements classed as "anti-Semitic stereotypes" in their questionnaire.

"For the first time we have a real sense of how pervasive and persistent anti-Semitism is today around the world,” said Abraham Foxman, the national director of the US-based non-profit ADL.

'France is not an anti-Semitic country'

The survey comes at a time when anti-Semitism in France is regularly in the headlines.

Only last month the French ambassador to Israel Patrick Maisonnave talked about a "murderous anti-Semitic hatred that is still prevalent in France".  And in his New Year’s address President François Hollande vowed to tackle resurgent anti-Semitism after the furore over controversial French comic Dieudonné M’bala M’bala, who was blasted by critics as being a peddler of anti-Jewish hate.

But some among the Jewish community in France believe ADL's survey exaggerates the problem of anti-Semitism in France.

"Stating 18 million French people show signs of anti-Semitic attitudes seems excessive to me," Marc Knobel, head of studies at France's Jewish umbrella organization CRIF told The Local on Thursday. "I have never seen a figure like that before."

"I don't doubt that anti-Semitism exists in certain categories of the French population, and there is anti-Semitic violence in France, but France is not an anti-Semitic country," he said.

Knobel says the ADL survey does not correspond to a recent annual survey carried out in France by the National Consultative Commission on Human Rights which revealed that Jews are more accepted in France than any other minority and that most French condemned anti-Semitism "unequivocally".

He also says there is little "scientific value" in comparing anti-Semitism in different countries.

"Anti-Semitism exists in all countries, even when there is no Jewish population, but in different forms. For example in Eastern European countries it is lead by far-right extremist groups. Anti-Semitism is a worry in France, as it is in Spain, in Belgium and in the whole of Europe.

"There is no real interest in producing a league table of different countries. What we can safely say is that it hasn't disappeared after World World II.

Knobel accepts however that anti-Semitic sentiment has risen in France in recent years, pointing to the fact there have been thousands of anti-Jewish acts committed and five people have been murdered due to hatred of Jewish people.

Four of those murders, including three Jewish children, were at the hands of Toulouse gunman Mohammed Merah, whose killing spree provoked a rise in anti-Semitism in 2012.

Knobel says the Israel-Palestine conflict has played a major role in the rise of anti-Semitism in France.

"The start of the second Intifada in October 2000 had a strong impact in France as it did elsewhere, with images of the conflict being broadcast back to France by the media," he said.

Those images, Knobel says, had a major impression on those living in France's poorer suburbs, but he says it is not accurate to link anti-Semitism in France to the country's Muslim population – which, at an estimated five million, is Europe's biggest.

"It's difficult to determine who are the perpetrators of these anti-Semitic acts in terms of their religion.

"The only thing we can say is that they are more often than not from poor suburbs in France and have been victims of racism and discrimination themselves. So they associate themselves with Palestinians and develop anti-Zionist and anti-Semitic views.

"Some are Muslims, some are not. They can come from North Africa, but also from other countries like Pakistan, Bangladesh, Nigeria or Mali," he adds.

This week a survey reported that a record number of French Jews looked set to emigrate to Israel in 2014.

The study noted the climate of anti-Semitism as one of the motives for leaving, however the main reason for Jews leaving was the current gloomy state of French economy.