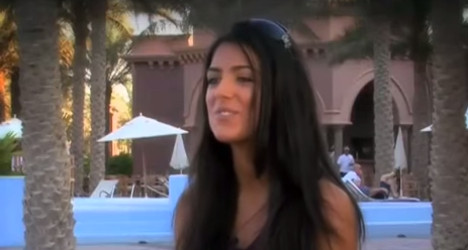 Model Anara Atanes has issued an apology to the whole of the French nation this week after she launched a foul-mouthed rant on Twitter.

Atanes was furious when her other half Samir Nasri was left out of the France World Cup squad by coach Didier Deschamps.

Atanes grabbed the headlines in the sporting pages when she took to Twitter to denounce Deschamps’ rejection of her man.

And on Wednesday Atanes, was clearly showing some remorse and perhaps regret for blasting a whole nation.

However her grovelling was greeted with mixed reactions on Twitter.

Although some did approve.

@_Anara_ you may have offended France, but you have gained a whole nation's affections in Britain.

For his part Nasri took his rejection in a slightly more dignified manner.

"I respect his choice, which hasn't been a surprise for me," Nasri told reporters in Abu Dhabi, where Manchester City are celebrating their English Premier League title.

Deschamps on Tuesday unveiled his 23-man squad for the World Cup as well as naming seven reserves, but there was no place for the 26-year-old Nasri.

"If he thinks my behaviour is bad, that's his business. Me, I play for my team (Manchester City) and I have no problem," said Nasri, who has 41 caps for his country.