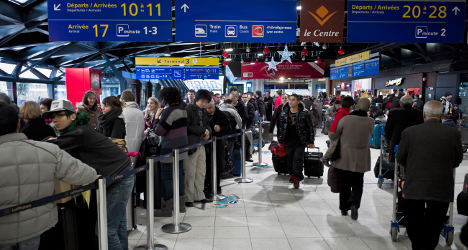 Travellers were scrambling for alternatives on Thursday after a national civil servant strike meant dozens of flights were cancelled and dozens more delayed at France's biggest airports.

Fliers coming into and out of Toulouse, Paris and Lyon were among those stuck on the ground with at least 20, 16 and seven cancellations respectively in the first half of the day, French daily Le Parisien reported.

Air traffic slowed significantly because only a minimum number of air traffic controllers were available to guide planes at French airports. It wasn't clear if the strike would continue on Friday.

Frazzled travelers complained of poor communication and few options as their flights were disrupted.

"They said on the airport website there would be a strike. When I called the airline, however, told me my flight was on schedule and then that it was cancelled," an unnamed passenger in Lyon told Le Parisien. "There was a communication breakdown about the reason for the strike, even the flight attendants didn't know."

The airport delays were part of a nationwide strike by government workers angry after four years without a cost of living pay increase. It doesn't look like their demands for more money are going to be met anytime soon.

As expected, the head of France's civil service Marylise Lebranchu confirmed on Thursday earlier pledges from Prime Minister Manuel Valls that pay would stay frozen this year.The freeze is part of a plan to cut French government spending and taxes in an effort to spur economic growth.

Strikers were also expected to take to the streets of Paris, with a march to leave from Denfert-Rochereau at 2pm.