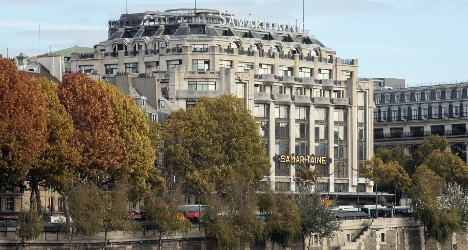 The renovation of the iconic Samaritaine store, which was due to open in 2013, has been hit by further delays. Photo: Jacques Demarthon/AFP

A French court Tuesday cancelled one of the permits for the renovation of Samaritaine, a legendary Paris department store, after a complaint that a planned undulating glass wall would be an eyesore.

The historic building on the Right Bank with a commanding view of the Seine is owned by luxury-goods conglomerate LVMH. It has been closed since 2005 when the building fell foul of safety codes.

A €460 million ($631 million) renovation is underway with plans for a luxury hotel, offices, shops and flats in the complex which includes the main building and three adjacent properties.

Under the plan, the Art Deco facade will remain unchanged but Japanese architecture firm Saanaa planned an undulating glass wall with silk screens for the building behind the hotel.

A Paris court ruled that the glass wall "clashed" with the look of the other buildings in the area.

The Paris mayor's office said it would appeal the ruling.

The renovated Samaritaine was supposed to have opened in 2013 but this been pushed back to at least 2016.

Samaritaine was created in 1870 as a small shop and rapidly expanded in a few years to being the largest department store in Paris.