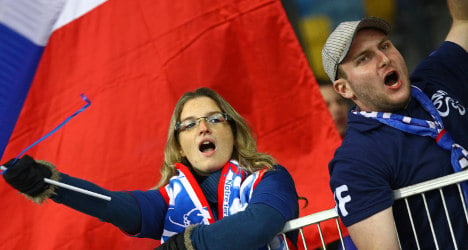 Are the lyrics of the Marseillaise too racist for modern France? Does France need a new anthem? Photo: Shutterstock

The famous Marseillaise anthem will no doubt be sung heartily across France over the coming weeks as the nation’s football team goes into battle at the World Cup in Brazil.

Whether the players themselves will be joining in the singing of an anthem that dates back to the time of the French revolutionary wars is another matter.

Some players, notably Karim Benzema, who is of Algerian origin, have been blasted in the past, mainly by those on the far right, for not sticking his chest out and singing along with gusto to the powerful lyrics (see below).

This week France’s Justice Minister Christiane Taubira, who herself was born in French Guyana, came in for the same criticism, again mostly from her foes on the far right, for declining to sing the Marseillaise.

While National Front leader Marine Le Pen said Taubira’s refusal to sing the anthem and then comparing it to karaoke showed the minister’s "contempt for France", others say the blame for the regular and bitter rows around the Marseillaise lie not with those who have to sing it, but with the song itself.

Critics believe the song, written in 1792 as a war song to rally French troops battling foreign armies, is no longer appropriate for modern multi-ethnic and peaceful France.

Even Taubira herself said the Marseillaise was the most abused song in the country.

Calls to change the anthem were led this week by French actor Lambert Wilson, who is due to host the opening ceremony of the Cannes Film Festival on Wednesday. (Lambert Wilson, actor and Master of Ceremonies at Cannes)

"I am extremely upset that nobody says it’s time to change the lyrics of the Marseillaise, which are from another time,” Wilson said.

“When I hear the words ‘impure blood, water our fields’, I am amazed that we continue to sing it,” Wilson told French radio RTL this week.

“The lyrics are terrible, bloody, racist and xenophobic and from another time. The music is fantastic but there are many words that you can’t listen to,” said Wilson.

The actor is of course not the first to suggest the words of the anthem be changed, indeed an organisation has been set up in France called “La Nouvelle Marseillaise” (The new Marseillaise) which wants the lyrics altered to be more appropriate to France’s “modern democracy”. (See video below)

The organisation's president Christian Guillet told The Local he understands why French people, footballers and politicians don't want to sing it.

"France has changed not just ethnically, but as a society, we have developed and need a hymn that reflects those changes," he added.

Various famous French figures from the past have also had issues with the song. Author Victor Hugo,  French Socialist leader Jean Jaurès, and the singer Serge Gainsbourg, who wrote his own reggae version in 1979, all thought the Marseillaise should be given a makeover.

When French poet and performer Léo Ferré penned his own “Marseillaise” in 1967 in which he compares the national anthem to a prostitute, using explicit lyrics, he provoked the anger of conservatives.

Those same conservatives have also been left infuriated over the years at the way the Marseillaise has been treated at various sporting events.

Before the 2001 football match between France and Algeria in Paris, the anthem was greeted with deafening whistles from the stands, provoking outrage among French politicians and leading to calls for it to be taught in all schools.

A year later, there were similar scenes as the Marseillaise was played before the French cup final between Lorient, a team from Brittany and Bastia from Corsica, which led to then President Jacques Chirac leaving the stands in disgust and the match being delayed by 15 minutes.

The scrutiny around the singing of the anthem appears to have increased in recent years with French daily Le Parisien pointing out that back in 1982 many French footballers declined to sing the Marseillaise and no one batted an eyelid.

Louis-Georges Tin the president of France's Representative Council of Black Associations, agrees the "xenophobic" lyrics are an issue but they are not the main problem when it comes to Marseillaise.

"The real question is how are we going to fight against xenophobia in France. If we changed the lyrics the problem would be exactly the same in France," Tin told The Local. "If people didn't sing it then people like Christiane Taubira would be criticised all the same.

Not all agree with the likes of Lambert Wilson and those who claim the lyrics need bringing in line with a modern, more politically correct France.

“There’s no way the words are racist,” French political expert Jean-Yves Camus, from think tank IRIS told The Local. “They just have to be put in the context of 1792 when France was being besieged by foreign armies. The lyrics are strong, but not racist.”

Jacline Mourand, from the department of Morbihan, said France needs a new positive energy and believes her song “France si Belle” (France so beautiful) could do the trick.

“This song exudes an energy that will bring everyone together in a more positive spirit rather than a warrior one,” she said.

Watch it for yourself in this video.

Lyrics of the first verse and chorus of Marseillaise (Wikipedia)

Where do you stand? Does the French national anthem need changing?