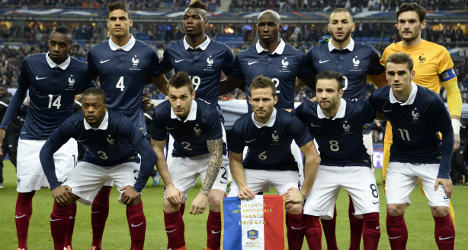 French football players will not be subject to a sex ban during the World Cup this year. Photo: Franck Fife/AFP

Didier Deschamps is known for enforcing strict discipline on his teams, so his players may have feared the worst when the coach was asked at a press conference this week, whether he would ban them from having sex during the World Cup in Brazil.

Thankfully for them, Deschamps showed he has a heart and said he wouldn’t prohibit lovemaking during the month-long tournament, although he would consider imposing some restrictions it seems.

“It all depends on when, how and how much,” said Deschamps, who named his squad for the World Cup on Tuesday.

“I don’t want them to be cut off from the outside world,” Deschamps said.

The French squad included three players, Karim Benzema, Franck Ribéry and most recently Olivier Giroud, who have all been the subject of scandals surrounding their bedroom antics, so Deschamps may have his hands full trying to manage the “when, how and how much”.

Deschamps admits he has no idea whether or not lovemaking is a hindrance to performance or not.

“I’m not a doctor. I don’t know if it is good or not,” said Deschamps. “The wives of the French players will certainly come to Brazil. If they have children they have the right to see their father,” he added.

Deschamps’ decision may have been influenced by his team’s doctor Jean-Pierre Paclet, who is in favour of players having sex telling website 20 Minutes in April that having sex “is relaxing” for the players “as long as it was not all night”.

Deschamps is not the only World Cup manager to be grilled about the bedroom rules he will impose on his team. Brazil coach Luiz Felippe Scolari has admitted he will not allow his players to perform “acrobatic sex” during the tournament.

“We will put limits and survey the players,” Scolari said.

The question of whether players should abstain from sex during the tournament arises every time a World Cup comes around and it seems that the Ancient Greeks are to blame for the theory that lovemaking can somehow damage sporting performance.

“There is a historic element that has become a kind of mythology in sport,” Greg Whyte, a professor in sports science at Liverpool John Moores University told The Guardian. “The Ancient Greeks believed it was detrimental in the build-up to the Olympics, that it sapped energy, lowered testosterone and reduced aggression.”

Whyte said all the research runs counter to that theory. He says the only thing that matters is getting enough sleep.