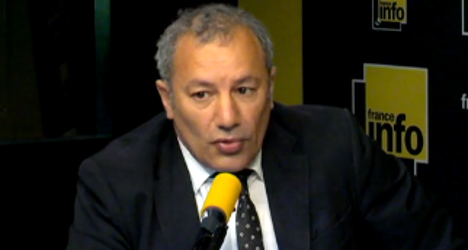 An ex-French ambassador has accused its foreign service of racism. Photo: France Info/Screengrab

Why is Zair Kédadouche in the news?

Kédadouche says he endured insults, career setbacks and less-than-equal status during his tenure as a French diplomat. This week he spoke out after his resignation letter, charged with accusations and fiery rhetoric, was leaked to the French press.

In one angry passage he wrote: “It was at the Ministry of Foreign Affairs (Quai d'Orsay) that I encountered the most abject racism and the humiliation of feeling that I did not belong to the same social class."

Tell me more about him

Until April 1st the 56-year-old was France’s ambassador to the micro-state of Andorra, a job he’d held just shy of two years. He was in the twilight of his public service career when this week's scandal broke.

Kédadouche, born in France to North African parents, had started his career as a defender for a trio of smaller, semi-pro football clubs in France. His last year on the pitch came in 1988, but by then had already made the move into local politics, sitting on the local council in the Paris suburb of Aubervilliers for three years.

Around this time he also began a career in France’s civil service that would see him work in social affairs and national defence before landing a job in former President Jacques Chirac’s administration in 2006.

Then in 2008 he was first named as consul general in Belgium and then ambassador to Andorra in 2012. Here, as he tells it, he ran into overt racism from his white colleagues.

What sort of racism did he encounter?

In Kédadouche’s resignation letter to President François Hollande he claims he suffered racism on numerous occasions. For example he was supposed to serve in the city of Anvers during his posting in Belgium, but he said superiors at the ministry vetoed the planned move.

“My Arab name would be a casting error in regards to the importance of the Flemish extreme right,” he alleged his bosses told him. It could also “be seen as a provocation of the large Jewish community in Anvers.”

He says he complained, repeatedly, in writing over this apparent racism, yet in response he received nothing but silence, he wrote. For Kédadouche it was deeply ingrained racism that he was up against.

“How can you believe that the government ever supported me when I was called a dirty rag head, dirty Arab, and told ‘go back to your country,’ while I was a diplomat, representing France abroad,” he told Europe 1 radio.

Kédadouche also insists he has not been the only victim of racism in the ministry.

"My case is not unique, far from it. If that was the case, it would only be personal," he wrote in his resignation letter.  He also claimed his bosses had made a strategic error in ignoring his qualities.

"Certain heads at the Quai d'Orsay considered my origins and my name as a handicap, when it could have been a considerable advantage," he wrote.

What is he doing about it?

He called upon the president to launch a parliamentary investigation of the ministry’s leadership in order to promote “the careers of women and French people who have immigrant roots,” he wrote.

He notes that he has voluminous proof and is ready take his case all the way to the European Court of Human Rights should his lawsuit be unsuccessful in France.

"There are still Bastilles to storm and the Quai d'Orsay is a bastille to demolish," he told France Info radio this week.

And what has the government said about all this?

The reaction was muted and defensive. According to the ministry Kédadouche never levelled any accusations of racism and xenophobia during investigations in the workplace.

“During all of his time at the Ministry of Foreign Affairs he always had the support and the attention of the ministry’s leadership,” the ministry said in a statement.