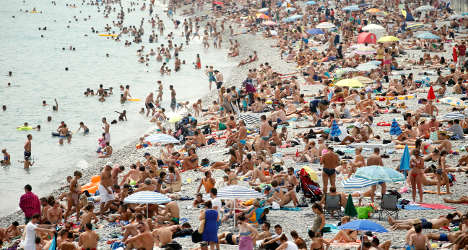 Traditionally Paris is the most peaceful place to be in August, as locals head away in search of the sun, but will things be different this year?

A new study suggests more French than ever will forget about going away this summer, deciding to stay at home instead.

A study from marketing firm Ipsos on behalf of travel company Europ-Assistance says 27 percent of the French population will be spending its summer holidays not on the beaches of the Riviera or in the Alps but at home. Only 58 percent plan to go anywhere, a drop of four percent over last year and a 16 percent tumble since 2008. The number of French planning to take a holiday is now just over the European average of 54 percent.

"The uniqueness of France where people normally go on holiday a lot is fading year on year," the study said.

That figure means the French no longer hold the top spot among Europeans planning to go on holiday this summer. The new champions are the Austrians, 68 percent of whom plan to leave on holiday, compared to 57 percent last year.

More and more Germans are also planning to get away this summer with 56 percent hoping to take a holiday compared to 52 percent last year.

However, France is not alone in seeing its people stay home this summer. The poll found that less than one in two Spanish (42 percent) intend to go away on holiday. In the UK only 54 percent were set to take a vacation, in Italy it was 52 percent and in Belgium, 47 percent.

"The study shows clearly that southern Europe has really been hit by the crisis, whereas the number of people from northern Europe heading off on holiday has reached the level it was at before the financial crisis," said Thierry Depois, director general of Europ Assistance.

However, the lucky folks who are set to go away this summer will spend slightly more than they did last year, with the survey suggesting the average holiday maker expecting to shell out €2,227 in 2014, the study shows. However holiday makers are focusing on cheaper options like campgrounds, staying with friends or staying in a holiday home.

The fact fewer French people are planning big trips this year probably isn’t much of a surprise given the country’s grim economic picture. Record-high unemployment numbers, dismal growth and a generally glum outlook that has left the French in what experts have termed a "collective depression".

If the French look set to stay at home this summer, millions of foreign tourists will be heading to France.