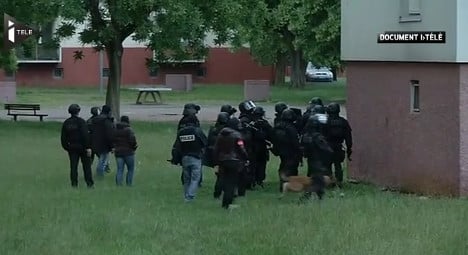 Six French nationals suspected of fighting a holy war in Syria were arrested in raids by anti-terrorism police on Tuesday, according to reports.

France's Interior Minister Bernard Cazeneuve said the raids were "new proof of the government's total determination to fight with all its might against terrorism and the recruitment of young people through violent radicalization."

The six suspects are believed to have left for Syria in December to join the jihad, before returning to French soil in recent weeks.

According to Europe1 radio, around 14 would-be jihadists from Strasbourg left the city, after telling their families they were going to Dubai on holiday.

But instead the men headed for Turkey, before crossing the border in Syria. Media reports says the men were recruited via social media channels.

French authorities have become increasingly concerned about the terrorism threat posed by jihadists returning from Syria to France.

In April the government launched an anti-jihad plan to try to prevent young French nationals being radicalized and then leaving for Syria.

The anti-radicalization plan presented by Interior Minister Bernard Cazeneuve seeks to thwart online recruitment efforts and make it harder for would-be fighters, especially the youngest ones, to get out of France.

Additionally France wants to work the families left shattered by their loves ones' departures.

"The emergence of a new generation of seasoned terrorists likely to strike on French territory, demands a fixed, firm and effective response from the state," said Cazeneuve on announcing his proposals.

"An entirely repressive response is not enough to stem the phenomenon. Preventive actions to counteract the "preachers of hate" will also be implemented," Cazeneuve said.

As part Cazeneuve's anti-jihad plan a telephone hotline was set up, that allowed members of the public and families to report, potential jihadists to police, to try and prevent them from leaving.

The hotline received around 24 "relevant" calls in a matter of days after it went live. Five of those calls concerned French nationals, who had left for Syria.

French authorities estimate there are around 300 French citizens fighting in the Syria, with around another 120 on their way to the country. Some 100 had already returned to France from the Middle East.