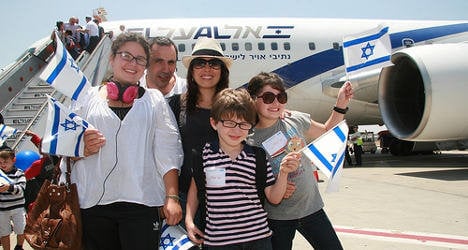 The number of French jews emigrating to Israel could hit a record high in 2014. File Photo: The Jewish Agency

The number of French Jews emigrating to Israel rose nearly four-fold in the first quarter of the year and could touch a record in 2014, a Jewish organisation said on Monday.

The Jewish Agency for Israel, a global body responsible for the immigration and absorption of Jews into Israel, said 1,407 people left France for Israel between January and March against 353 people a year earlier.

"This phenomenon is speeding up" said Ariel Kandel, the head of the Jewish Agency's French chapter.

"We will not finish the year with four times more the number than in 2013 but if the current rhythm continues, there will be more than 5,000 French people leaving for Israel, something that has never happened since its creation in 1948," he said.

Kandel told AFP that the reasons for the hike in numbers were a "climate of anti-Semitism" and the prevailing gloomy economic situation in France.

Last autumn The Local reported how the number of French Jews heading to Israel had skyrocketed while at the same time the number of Jews from North America taking the same step has dropped by eight percent.

David Parsons, media director at the International Christian Embassy, a partner of the Jewish Agency, told The Local at the time that the reasons for upping sticks and moving to Israel had more to do with finance and faith, than fear.

“Since the economic crisis a lot of French Jews have made aliyah because Israel has recovered more quickly from the economic downturn and unemployment rates there are much lower among the younger generation," Parsons said.

"I asked some people making aliyah their reasons for moving to Israel and they seemed very upbeat.

"They didn’t cite anti-Semitism. They just felt it was time to come to the homeland. They identified with the Jewish people and the Jewish state. Some had relatives here.

"Their reasons were linked to faith and community more than anything else.”

But Parsons accepted that the impact of the 2012 Toulouse school shooting, in which three Jewish pupils and a Rabbi were gunned down by Al-Qaeda inspired gunman Mohamed Merah could not be discounted.

France's Jewish community is one of the largest in Europe and pegged at around 500,000.

More than three million people have emigrated to Israel since 1948, including some 90,000 from France.