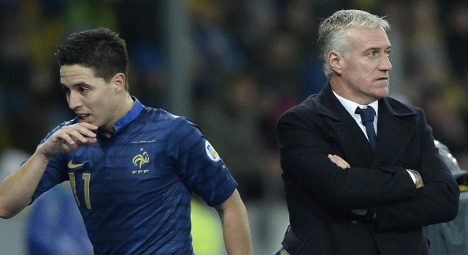 Neither 26-year-old Nasri, who has won 41 caps, nor Monaco captain Eric Abidal, capped 67 times, feature in the squad or on the seven-man standby list.

"He is a player of great quality, but Samir's performances for France have not been of the standard of those with his club Manchester City," Deschamps said after revealing his squad live on French television channel TF1's evening news programme.

"He is an important player and a first-pick for Manchester City and that is not the case for France.

"And when he is a substitute he is not happy, and that is felt by the squad as a whole. That is why he is not on the list."

Nasri, who was also left out of Raymond Domenech's squad for the 2010 World Cup, last played for France in the 2-0 defeat to Ukraine in the first leg of last November's World Cup qualifying play-off.

Abidal also played in that game before losing his place, and Deschamps admitted that he preferred to take a younger player than the former Barcelona man, who is now 34.

There are eight players aged under 25 in the squad, including the Real Sociedad winger Antoine Griezmann, who made his international debut against the Netherlands in March.

Paris Saint-Germain left-back Lucas Digne, 20, was preferred to Gael Clichy of Manchester City while Newcastle United's Loic Remy, who played under Deschamps at Marseille, was selected among the forwards rather than Alexandre Lacazette, scorer of 15 goals in Ligue 1 this season with Lyon.

France have been drawn in Group E with Switzerland, Ecuador and Honduras.

They will play friendlies against Norway at the Stade de France on May 27, against Paraguay in Nice on June 1 and against Jamaica at Lille's Stade Pierre-Mauroy on June 8 before flying to Brazil.

Their opening World Cup game will be against Honduras in Porto Alegre on June 15.