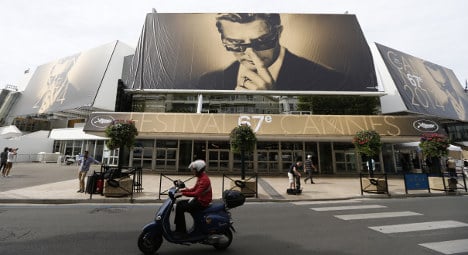 The Cannes Film Festival is set to open on Wednesday with stars from the screen expected to descend on the resort. Photo: Valery Hache/AFP

Giant portraits of movie stars beamed down on bypassers in Cannes on Tuesday as Hollywood heavyweights and first-time directors prepared to pour into the French Riviera resort for the world's biggest film festival.

Hugh Jackman, French actress Lea Seydoux and Natalie Portman were just some of the celebrities whose faces adorned buildings in the city centre, as if the lure of real-life stars making their way to the 67th Cannes Film Festival was not enough.

Ryan Gosling, David Cronenberg, Ken Loach and Sophia Loren are all due to make an appearance at the 12-day glitzy event that kicks off on Wednesday with the world premiere of controversial biopic "Grace of Monaco" starring Nicole Kidman.

And in a particularly original stunt, Sylvester Stallone, Harrison Ford and Arnold Schwarzenegger – the stars of all-action romp "The Expendables 3" – are due to arrive in town on Sunday onboard a tank.

The festival is known worldwide for its mix of art house gravitas and extravagance.

Every year, movie stars, industry executives, journalists in their thousands and curious onlookers pour into the Riviera resort that lives and breathes cinema for close to a fortnight, its population briefly tripling from just over 73,000 to over 200,000 people.

Luxury hotels on Cannes' famed Croisette seaside promenade fill up with the great and the good, with suites going for tens of thousands of euros.

Stars wanting to get away from autograph hunters and revellers stay at the Eden-Roc, an exclusive hotel perched on a rock overlooking the Mediterranean between Saint-Tropez and Monaco.

The nine-member jury will sit down for a Tuesday evening dinner ahead of the opening at the aptly-named, Michelin-starred "La Palme d'Or" restaurant. Glitz, money and security

Thousands of plants have been rolled out for the occasion and close to 700 police officers are on hand to ensure security and prevent high-profile jewellery robberies of the kind experienced last year.

Private beaches have been temporarily transformed into nightclubs or trendy eateries. In big hotels, suites booked by fashion houses have turned into showrooms.

A total of 18 films are contending for this year's coveted Palme d'Or prize, including Loach's "Jimmy's Hall" that may turn out to be the final feature film from the 77-year-old Cannes veteran.

Aside from the star quality, the festival is a huge, money-making machine as producers and distributors get together to haggle over new projects.

The annual event costs a whopping 20 million euros ($27.5 million) to put together, but generates much more in business deals and tourism, with hotels making around 15 percent of their yearly turnover during the event.

As organisers put the finishing touches to preparations, they will be watching with dread the one element they cannot control — the sky — hoping desperately that no sudden thunderstorms come along to wash away some of the sheen.

When it comes to the all-important red carpet leading up the 24 steps to the festival palace, they have taken no chances, making sure it will be renewed at least twice a day for the duration of the festival.

And in an eco-touch to the event, French utility giant Veolia will recycle every last bit of the carpet into… car mats.