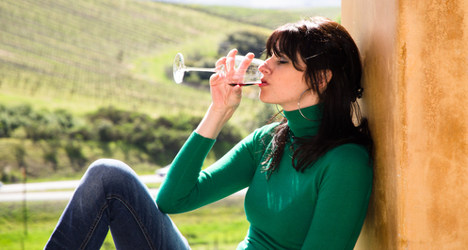 The United States has unseated France as the world's wine king. Photo: Wine.

Global wine consumption fell marginally in 2013 and the United States outstripped France as the top consumer, the International Organisation of Wine and Vine (OIV) said Tuesday.

The United States was the top consumer for the first time at 29 million hectolitres, with domestic production accounting for four-fifths, said Jean-Marie Aurand, the head of the intergovernmental organisation that compiles global statistics for the industry.

France was in second place at 28 million hectolitres, followed by Germany, Italy and China.

Wine consumption also fell in other European countries such as Italy, Spain and Britain, said the OIV.  Aurand said the overall decline in consumption may have been due to price effects as production was weak in 2012.

A warning in a global sea change in wine consumption came earlier this year when China's surging thirst for red wine launched it past France as the world’s top consumer of vin rouge last year.

With 1.87 billion bottles of red consumed in China, the demand there has grown by 136 percent since 2008. Though about 80 percent of all the wine they drink is made in China, so it’s a double sting for France, according to a report from British firm International Wine & Spirits Research, which revealed the information.

A effort to capture some of the Chinese red wine sippers has led to major French labels to set up shop in China.

Domaines Barons de Rothschild (DBR), maker of the renowned Chateau Lafite reds, is planting roots in China with an initial 15 hectares (37 acres) in Penglai, a hilly green peninsula dotted with vineyards on the east coast of Shandong province with a century-long history of winemaking.