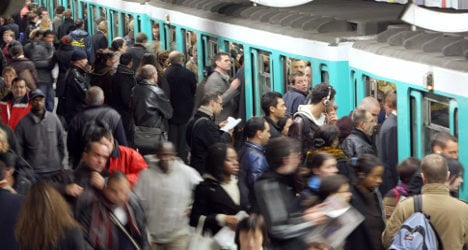 Whether it’s the man who refuses to give up his seat to an elderly person or else the passenger who boards a train before letting others get off first, visitors to the French capital have their fair share of complaints with regards to behaviour on the city's transportation network.

But a new report from the RATP’s Observatory of Incivilities, published exclusively on Monday by French daily Le Parisien, suggests there has been a significant change of attitude in the past year.

According to a survey of 1,450 commuters conducted at the beginning of April by TNS Soffres, incidences of impoliteness are becoming increasingly rare.

Over the past year, the average commuter witnessed around 74 acts of impoliteness compared with 81 in last year’s survey – a decrease of nine percent.

In the survey, commuters were questioned about 30 so-called “incivilities” ranging from general manners to cleanliness.

One of the most positive changes in behaviour, according to the survey, was the decreasing number of people who refuse to give up their seat to an elderly or disabled person ( down by 24 percent).

View from La Rue: Are Parisians really that rude to tourists? Meanwhile, those who refused to remove their backpack on a crowded train tumbled by 19 percent.

The number of people who held open the doors at metro and RER stations fell by 13 percent and those eating on buses or trains dropped by nine percent.

However, while these basic courtesies appeared to have increased, there was sadly no change when it came to reports of aggressive behaviour, according to the paper.

Failure to stamp a ticket, jumping over ticket turnstiles and failure to wait for passengers to get off the train before boarding were listed as some of the most common acts of bad behaviour.

Encouragingly, though, 98 percent of commuters said they would be willing to change their behaviour and 88 percent said they would raise awareness of the issue, much to the delight of RATP.

“Passengers doesn’t expect the world from others and are ready to act themselves,” RATP’s communications director Isabelle Ockrent was quoted as saying. “We don’t want to lecture [people], as we know that impoliteness is sometimes due to transport conditions.”