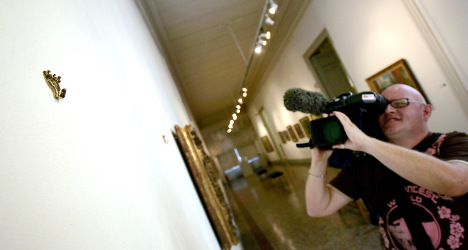 The US-based alleged mastermind of a French Riviera art heist is on trial. Photo: Eric Estrade/AFP

The presumed mastermind of a brazen art theft from a French Riviera museum involving four paintings by Monet, Sisley and Breughel denied any role as he went on trial on Monday.

The Miami-based Bernard Ternus, who is in his sixties, was sentenced in the United States to five years in prison in 2008 over the theft at Nice's Jules Cheret museum a year earlier.

Transferred to France last year after serving his sentence, Ternus — who is being held in custody — told the court in Aix-en-Provence in southern France that he had been framed.

He was caught after being approached by two men who said they were looking for paintings by Dutch masters. Ternus claimed it was an FBI sting operation.

"I was manipulated, I have never in my life asked anyone to steal paintings," he told the court.

The paintings were recovered in the southern city of Marseille. They include "Cliffs near Dieppe" by Claude Monet, "The Lane of Polars at Moret" by Alfred Sisley, "Allegory of Water" and "Allegory of Earth" by Jan Brueghel the Elder.

Ternus said a mysterious Frenchman, who had helped him settle in the United States, had asked him to get some paintings. He said the manner was at first insistent and then turned threatening.

Five men who were arrested in 2008 after a sting operation involving famed FBI art crimes investigator Robert Wittman were sentenced to between two and nine years in December 2011 by a French court.

The thieves broke into the gallery dressed as cleaners and staged the brazen heist during lunchtime on August 5, 2007, making off with the paintings in five minutes.

The trials runs until Wednesday.