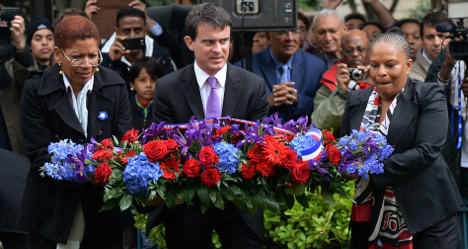 Far right leaders were calling for Justice Minister Christiane Taubira’s resignation on Monday after she stood silent as the Marsaillese was sung at an event this weekend commemorating the abolition of slavery.

While Taubira's silence during a ceremony on Saturday in Paris's Jardin de Luxembourg, first revealed in a politician's blog post, initially left right wingers grumbling, it  was her response that sent them into fuming outrage.

In a post to her Facebook page, Taubira explained her silence saying the song is a moment to reflect. But she didn't stop there.

“Sometimes the crowd, in a counterpoint to the singers, finds its tempo and range — bass against tenor, high-pitched voices with altos — and emits a singular harmony. This is rare,” the minister wrote. “But certain circumstances call more for reflection…than onstage karaoké.”

In a statement Le Pen called for Prime Minister Manuel Valls to sack her.

“By comparing "La Marseillaise" to "onstage karaoke," and refusing to sing it, Christiane Taubira has revealed her true colours, and those of the administration,” Le Pen wrote. “This unacceptable gaffe is indeed symbolic proof of the highest order of their contempt for France, for its history and its people, who love to sing their anthem, and are proud of it.”

Other members of the anti-immigrant, anti-EU National Front party also called for Taubira to step down as wells as the centre-right UMP politician Geoffroy Boulard. He sparked the controversy by reporting Taubira’s silence in blog post that claimed she admitted not knowing the words to France’s national song.

However, there is nothing in French rules obliging leaders to sing the national anthem and other top officials have stayed silent during its performance. Both current President François Hollande and ex-president Nicholas Sarkozy have refrained from singing it during public events.

A willingness to not sing the Marseillaise has led the far right to attack other public figures. The National Front called for the exclusion of footballer Karim Benzema from France’s national squad after he reportedly said: "I cannot be forced to sing the Marseillaise."

Real Madrid striker Benzema was born in France to parents of Algerian descent.

Taubira, the most prominent black person in French public life, is a regular target for France's right-wing opposition, partly as a result of her having been the main government architect of last year's legislation to legalize gay marriage, and partly because she is seen as being soft on crime.

The hostility towards her has, at times, spilled over into overt racial abuse with the minister having been the subject to a string of 'banana' slurs over the last year.

Le Pen and UMP leaders have distanced themselves from these attacks but commentators have interpreted them as a sign of taboos on the expression of such abuse becoming less powerful in French society.

The incident also comes weeks before voters are to head to the polls in European Parliament elections, which are expected to result in a big victory for the National Front. Recent polls have showed the party could pull in as much as 22 percent of the vote, beating out both the conservative UMP and the Socialists.