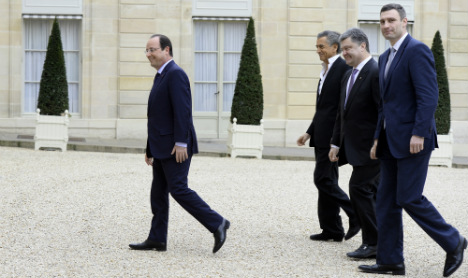 French President François Hollande starts a three-day visit to the South Caucasus on Sunday as he seeks to bolster European ties on Russia's southern doorstep amid the crisis in Ukraine.

Hollande was due to arrive in the Azerbaijani capital Baku at around 6:00 pm on Sunday, on the same day separatists in eastern Ukraine held referendums on breaking away from the country.

His visit is unlikely to be welcomed in Moscow, which has long considered the ex-Soviet republics of Azerbaijan, Armenia and Georgia to be in its sphere of influence.

French officials insisted the visit is not confrontational and aimed only at boosting the European Union's relations in the region.

"We do not see this work for closer ties with the European Union as against Russia," a source in Hollande's office said.

"This is not a combative visit, but one aimed at promoting closer ties," the source said.

Hollande will meet Azerbaijan's President Ilham Aliyev before heading to Armenia on Monday and Georgia on Tuesday.

Like Ukraine, all three countries have sought closer ties with Europe, with Georgia going so far as to seek to join the NATO military alliance.

Hollande's visit to the Georgian capital Tbilisi is especially sensitive in the wake of the 2008 Georgia-Russia war over the separatist regions of South Ossetia and Abkhazia.

The EU is keen to sign "Eastern Partnership" political and trade agreements with ex-Soviet countries, including those in the South Caucasus.

Such a deal with Ukraine was at the origin of the country's crisis when then-president Viktor Yanukovych unexpectedly refused to sign up under Russian pressure.

His move triggered pro-EU protests in Kiev which evolved into broader demonstrations that eventually led to Yanukovych's ousting.

The ensuing chaos saw Russia annex Crimea from Ukraine and parts of Ukraine's Russian-speaking east threatening to break away.

Much of the focus of Hollande's visit will be on economic ties, in particular in Azerbaijan, where European companies are heavily involved in the country's energy industry.

In Armenia he will focus as well on cultural ties, attending a concert Monday by Charles Aznavour, the French crooner of Armenian origin, and dedicating a square to Missak Manouchian, a French-Armenian poet and resistance fighter who was executed by the Nazis.

There are some 500,000 French of Armenian origin and the community is an important political constituency.

Hollande will also discuss the Nagorny Karabakh dispute with the Azerbaijani and Armenian leaders, after years of fruitless negotiations on resolving the frozen conflict.

Along with Russia and the United States, France has for 20 years been trying to mediate a peace deal in the conflict, which saw Armenian separatist backed by Yerevan seize Karabakh from Azerbaijan in a war that claimed some 30,000 lives.

The conflict has simmered on, with frequent exchanges of gunfire and vows from Baku to retake the region by force.