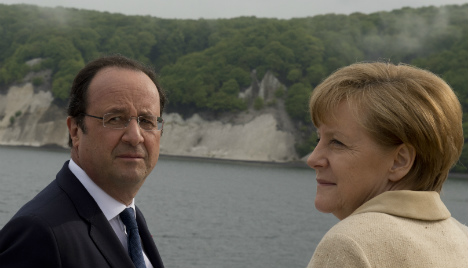 "There is a meeting of European leaders and heads of government set for May 27th, but the decision will not be made on the Tuesday or Wednesday following the elections," said German Chancellor Angela Merkel during a visit by French President Francois Hollande to northern Germany.

"The negotiations will spread out over several weeks," she said.

By signalling a delay, Hollande and Merkel are also indicating that the nomination of the person to replace Jose Manuel Barroso will probably involve heated political horse-trading that new EU rules were intended to help avoid.

The EU Lisbon Treaty, hammered out in 2009, spelt out how national leaders must for the first time take European Parliament election results into account as they nominate the person to lead the European Union's far-reaching executive.

The major political groups in the European Parliament have accordingly picked nominees for the post, so that if their lists come out on top in the elections in two weeks, Merkel, Hollande and all 28 EU bloc leaders will have their choice ready-made.

But though leaders must take the vote into account, they are not legally obliged to pick the winning party's nominee, and some bloc national leaders are loathe to have European lawmakers force their hand.

Speaking beside Merkel, Hollande said "a delay" would be necessary to find the right nominee, even though the vote result "must be respected".