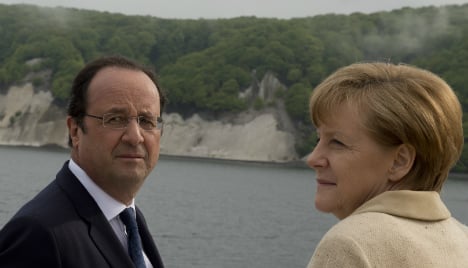 Germany's Angela Merkel welcomed French President Francois Hollande to a picturesque Baltic coastal town Friday for talks meant to strengthen the personal chemistry between the two leaders at the heart of Europe.

Braving a slight drizzle, Merkel greeted Hollande in the seaside resort of Sassnitz, saying that getting to know each others' homes, "in view of the many problems we have to discuss, is a good thing".

A range of pressing issues — from the tense standoff with Moscow over Ukraine, to European elections in two weeks — were on the agenda of the two-day visit that started on what is the EU's official "Europe Day".

They are due to make a statement on Ukraine Saturday, the Elysée palace said.

But with much sight-seeing on the schedule, including a stroll past the Gothic red brick churches and gabled houses of Stralsund on Saturday, the "informal" meet was intended to help the political duo improve their initially rocky relationship.

While conservative Chancellor Merkel throughout the eurozone crisis has championed the need for fiscal discipline, Socialist Hollande has advocated stimulus measures to boost growth and ease the pain during his two years in power.

However, divisions between Berlin and Paris have faded in light of a new common threat: the standoff with Russia in the Ukraine crisis, which has plunged East-West relations to their lowest point since the Cold War.

Hollande on Friday told his host: "Angela, I am very pleased by your invitation… because it is you, because this is a beautiful place, and finally because it is May 9, Europe Day."

He said they would use the relaxed setting to freely discuss "the new Europe we want to build together, at the same time address more sensitive policy issues, and here I'm thinking about Ukraine."

As a small group of tourists under umbrellas looked on, the two then boarded a ship, where they were serenaded by a fishermen's choir, before heading off into the grey Baltic sea off Ruegen island as rain started to bucket down.

Merkel has only occasionally invited other world leaders to the UNESCO Heritage-listed port — among them former US president George W. Bush, who during a 2006 visit was given a barrel of pickled herring, a local speciality, and was treated to barbecued wild boar in a nearby village.

The invitation "is certainly a sign of recognition and esteem", said Franco-German Institute vice president Henrik Uterwedde, who added that relations "have clearly become more friendly" since the days when Merkel openly backed Hollande's election rival, then president Nicolas Sarkozy.

Political scientist Claire Demesmay of the German Council on Foreign Relations said the talks are "meant to signal that we have entered a phase of trust, to signal the element of personal closeness that has always been fundamental in Franco-German relations".

Nonetheless, the two 59-year-olds do not meet each other on equal political footing. While Merkel rules over a humming economy and last year won a third term by a landslide, Hollande faces budget woes and suffered a sweeping defeat in recent municipal polls.

Also on the agenda will be a potential major business deal, as German engineering giant Siemens eyes a stake in France's Alstom, against a bid from US rival General Electric. While Paris favours the German offer, Berlin's official line is that the companies involved must decide.

At the EU level, ahead of parliamentary elections on May 22-25th, both leaders have cause to worry about an expected rise of populist and eurosceptic parties.

Whatever the outcome of the polls, both Hollande and Merkel "have a special responsibility in the choices that must be made" after the elections, as they seek to revive the EU's main bodies, said a source close to Hollande.