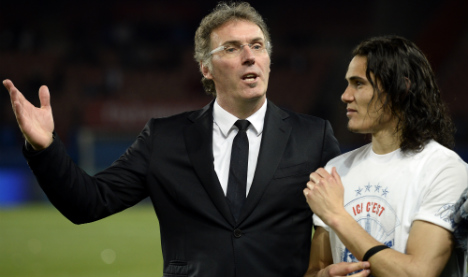 "I think next year we will improve one or two things. We will wait to find out the Financial Fair Play punishments, but I think we will still be able to improve the team," said Blanc, whose side travel to Lille on Saturday knowing a win will see them set a new record for the most points in a Ligue 1 season, beating the previous best of 84, set by Lyon in 2006.

"We already have a very, very good team, a team that has been together for two years and is getting to know itself well.

"We need to target the right areas and I am convinced we will improve the squad. The club has considerable means but the solution, even without Financial Fair Play, is to improve in terms of quality.

"I don't think we need seven, eight or nine players. Not many players will come to PSG but those who do come will give us a leap in quality."

Blanc, who on Thursday signed a one-year contract extension keeping him at PSG until 2016, has left captain Thiago Silva out of the squad for the game at Lille, saying that the Brazilian is "physically and mentally exhausted".

"Thiago Silva will not play (against Lille)," said Blanc, adding that the centre-back could also miss the final match against Montpellier.

"As the goals have been achieved he wants to heal himself, it's understandable," said Blanc, adding that Silva had often played "in pain this season".

Blanc added that after helping PSG to a second straight Ligue 1 title on Wednesday Silva was now focusing on "Brazil, who have a chance of winning the World Cup".

Cavani and Van der Wiel will also be absent against Lille due to minor injuries.