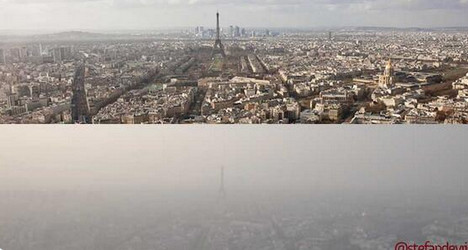 A plan has been launched to try to prevent a repeat of the soaring pollution levels that hit Paris earlier this year. Photo: Stefan de Vries/Twitter
The five-point plan, to be presented to the city council next week, includes making public transport free when pollutions levels rise to levels deemed a risk to people’s health.
The city implemented that measure in March, at a cost of around €4 million a day, but was criticised for waiting too long before doing so.
It also later banned half the city’s cars for a couple of days, but again was accused of doing too little too late.
The new action plan also includes various measures to encourage commuters to leave their vehicles at home.
The level of official “pollution alert” is currently at 80 microgrammes of tiny particles for every cubic metre of air, but the new action plan calls for measures to be taken as soon as it goes beyond 50 microgrammes.
Residential parking should be made free as soon as this level is reached, and on the second day of levels above 50 microgrammes the city’s municipal bicycle and car rental schemes should be made free for the duration, the report urges.
Paris will also seek to pressure the city transport authorities to stop using buses running on diesel.
Parisians will also be encouraged to switch from diesel to petrol-run cars, which are seen as less polluting. If the city council adopts the proposed measures, drivers switching vehicles will be given a year’s free commuting on public transport.
Finally, the city will look at the feasibility of creating low-emission zones where highly polluting vehicles are restricted or banned altogether.
The environmental group Ecologie Sans Frontière, which filed a criminal complaint for "endangering others" over the pollution spike in March, welcomed the proposed measures.
“Things are going in the right direction,” the group’s president Franck Laval told The Local, adding that it was partly due to his criminal complaint that Paris authorities had started taking action.
But he said banning cars from the streets using the system employed in March, which blocked odd-number licence plates one day and even the next was “discriminatory”, as it did not prevent heavily-polluting vehicles taking to the streets.
A better system, he said, would be to evaluate the “greenness” of individual cars and in crisis periods ban only the most polluting ones. France’s green party on Monday presented a law proposal in the national parliament that would see the gradual reduction of diesel use in the country.
Environmental groups blame successive French governments for promoting the use of diesel vehicles – which are used by two thirds of French motorists and are more polluting than petrol cars – via tax breaks that are still in place.
by Rory Mulholland