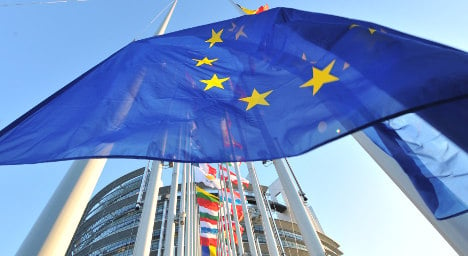 Immigrants and identity, why the French are turning away fom the EU. Photo: Georges Gpbet/AFP

The survey, published on Europe Day which is supposed to be an annual celebration of peace and unity in Europe, showed that only 51 percent of French still want their country to belong to the 28-nation bloc.

That was down from 67 percent a decade ago, according to the CSA survey for BFMTV news channel and Nice Matin newspaper, which comes a fortnight
before voters across the continent make their choice in elections for the European Parliament.

France’s far-right Front National, led by Marine Le Pen, is tipped to spearhead a surge by populist parties across Europe in the vote for the EU's only directly elected body.

Polls show that the anti-immigrant French party is in pole position alongside the mainstream centre-right UMP, with President François Hollande's ruling Socialists trailing in third place.

Friday’s  CSA poll said that one French person in two was “worried” about the European project, 10 percent were “hostile” and 13 percent were “indifferent”.

SEE ALSO: Is France really a nation of  Eurosceptics? A mere 18 percent of the 1,048 people questioned late last month said they were “confident” about the future of the European Union, with just 2 percent claiming to be “enthusiastic”.

President Hollande sought this week, in a text he wrote for Le Monde newspaper, to rally support for the EU and to warn of the dangers of the rise of the far right.

“Exiting from Europe is exiting from history,” he wrote, adding that to abandon the euro single currency – which the Front National is urging – would lead to the nation's decline.

While acknowledging disappointment with the EU especially in combatting unemployment, Hollande called for action by a “progressive” Europe.

“France wants more than progress in Europe, it wants a progressive Europe,” he wrote.

But his views are not widely shared by French voters.

The CSA poll showed that voters – 70 percent of them – are disillusioned with the European Union because of its failure to help stem rising unemployment in France, which has a record 3.3 million people out of work.

Sixty-three of those surveyed said they were disappointed with the EU because of the decline of social protection, while 60 percent cited growing numbers of immigrants as another reason for falling out of love with the European project masterminded by France and Germany.

“The study shows that the growth in French mistrust of the European Union is based on the spread among almost the entire population of fear of the economic and social consequences of the European project, leading the French to hope for a reinforcement of the powers of member states and a decrease in those of the European Union,” said Marek Kubista of the CSA.

The poll is the latest evidence that voters in France and across the continent perceive the EU as remote and unaccountable, which is expected to boost support for far-right, anti-EU parties in countries such as France, Britain, the Netherlands and Hungary.