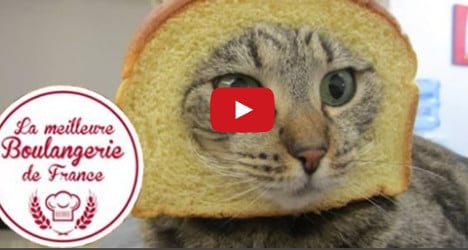 An unfortunate French cat has become the star of the worldwide web after it made a brief but stunning appearance in a French TV show – The Best Boulangerie in France.

As the cameras filmed in front of the boulangerie in the town of Figeac, in the Lot department of southern France, a grey cat appears running along the pavement past the bakery at high speed.

The only problem for the cat was that it didn’t appear to notice, the glass door of the shop was open, and hurtled straight into it.

The eagle-eyed TV viewers quickly put the clip online, complete with the picture seen above of a cat with its head poking through some bread, and it has since gone viral around the web after being picked up by social news site Buzzfeed. It's been viewed over two-million times.

See for yourself why. And it’s recommended you watch the clip with the volume up.