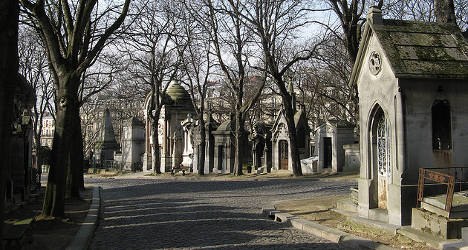 The famous Père Lachaise cemetary in Paris where tourists found the body of a murdered man this week. Photo: Olivier Bruchez/flickr

Police arrested a 27-year-old man who lived in a district near the burial ground in the east of Paris just hours after the macabre discovery.

The Americans were visiting the popular tourist attraction on Wednesday when they spotted the body lying between two tombs. The dead man, named by Le Parisien newspaper as 66-year-old François Boudinot, had suffered several blows to the head but police said that the autopsy on the victim was not able to conclude that these had been the cause of death.

The victim lived in an apartment in the 20th arrondissement of the city just 400 metres from the historic cemetery, where he regularly went for a stroll among the elaborate sepulchers and tombs in its tree-lined alleys.

Police investigating the murder quickly went to the home of the 27-year-old suspect who had been arrested a fortnight earlier after a violent incident in the cemetery.

The suspect was named only as Eric N. by Le Parisien, which said that police found clothes with traces of what appeared to be blood in the apartment where he lived with his father.

One neighbour told the paper that the young man was “very polite and friendly” but that he often had shouting matches with his father.

The suspect was still in custody in Friday in police headquarters in Paris.

Situated on a hill overlooking Paris, the 110 acres of the Cimetière du Père Lachaise houses the graves of French and foreign figures such as the writers Balzac and Marcel Proust, the composer Chopin, and the singer Edith Piaf.

The tomb of the legendary Doors frontman Jim Morrison is one of the most visited. He died in Paris in 1971 of a suspected drug overdose.