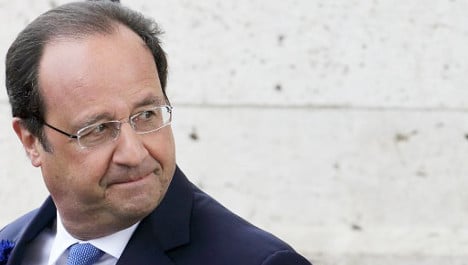 In a commentary published in Le Monde on the anniversary of the Allied victory against Nazi Germany in World War II, Hollande recalled the words of another Socialist president, Francois Mitterrand, who defended European integration by saying "nationalism means war" while "Europe means peace".

Hollande's comments come as polls show the far-right National Front (FN) could come out on top in the May 25th European elections in France.

FN leader Marine Le Pen has been rallying supporters with a nationalistic theme, saying France's future was being determined in Brussels, not Paris.

The FN is also hoping to form an alliance with other eurosceptic parties in the new European Parliament.

"Exiting from Europe is exiting from history," Hollande wrote in defence of the EU, adding that to abandon the euro single currency would lead to the nation's decline.

While acknowledging disappointment with the EU especially in combatting unemployment, Hollande called for action by a "progressive" Europe.

"France wants more than progress in Europe, it wants a progressive Europe," he wrote.

The FN in contrast is riding high after the anti-immigrant party made historic gains in that election, winning the mayorship in at least 11 towns and over 1,400 seats on municipal councils.

The FN's score was widely seen as a result of unhappiness with Hollande and his government — which led him to reshuffle the cabinet — as well as general exasperation at mainstream parties which many believe are unable to resolve problems of sky-high unemployment, poor growth and security.