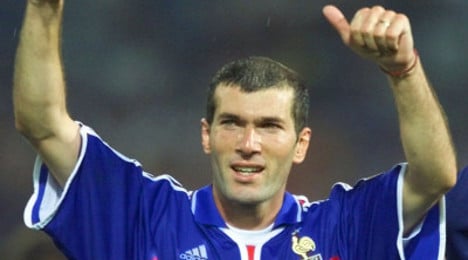 Is French footballing legend about to get his first job as a coach at Ligue 1's Bordeaux? Photo: Patrick Hertzog/AFP

France legend Zinedine Zidane is poised to become head coach of Ligue 1 side Bordeaux, according to reports in the French media on Tuesday.

He is currently working as an assistant to Real coach Carlo Ancelotti, and in January graduated with a diploma in sports management at the Centre for the Law and Economics of Sport in Limoges.

Reports linking him to the job at Bordeaux have gathered strength this week with some papers suggesting his arrival at the Girondins was imminent.

The Sud Ouest daily wrote Tuesday that Bordeaux had made Zidane "top of their list" to replace existing manager Francis Gillot.

Gillot is under contract until 2015 with a release clause built into his deal.

Bordeaux president Jean-Louis Triaud said on Tuesday: "It's a rumour and the time is coming, when it's the moment to discuss the set up for next season we'll talk about it then."

He added: "It's not the news for today," he added.

I-Tele reported that "Zidane had met Jean-Louis Triaud" and that the two men "were almost in agreement on everything".

Zidane and Triaud are set to meet up again "by the end of the week" to wrap up the arrangement.

If it comes about Zidane will become the second 1998 French World Cup champion to manage Bordeaux after his former teammate Laurent Blanc, who was also a rookie coach, taking over the Bordeaux reins in 2007.

Blanc, now in charge of defending champions Paris Saint-Germain who can win the 2013-2014 title on Wednesday, guided them to the Ligue 1 title in 2009.

The majestic playmaker's last game was with the French team in the 2006 World Cup final in Berlin against Italy, when he scored a goal but was then sent off in the second half for head-butting Marco Materazzi.

Bordeaux are placed seventh in L1 ahead of the visit of Marseille on Saturday for their penultimate game of the season.