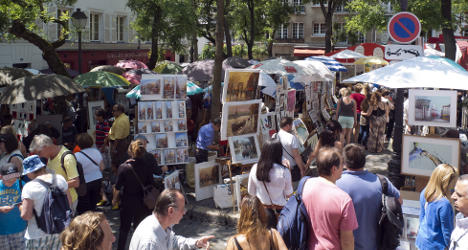 Will chinese police be patrolling Paris to help protect its nationals who are visiting Paris and often the target of petty crime? Photo: Patrick Kovarick/AFP

Chinese police will help patrol tourist destinations in Paris this summer after a rise in muggings and attacks on Chinese tourists, a source in France's interior ministry told AFP this week.

The ministry source said the Chinese police would help their French counterparts in Paris tourist spots but declined to give numbers.

More than one million Chinese visitors come to France every year and there have been concerns over a number of muggings and attacks against them.

In March last year, a group of 23 Chinese visitors were robbed in a restaurant shortly after they landed at Paris's Charles De Gaulle airport.

The tourists were on a 12-day trip across Europe but it all went awry when they stopped for dinner at Le Bourget, to the north of Paris in the Seine-Saint-Denis area. On leaving the restaurant they were attacked by three men.

That attack prompted the then Minister for Tourism Sylvia Pinel to pledge to do whatever was needed to protect Chinese visitors.

Pinel said "everything will be done to find the perpetrators" and underscored "the determination of the French government to ensure the security of tourists in France."

The number of Chinese visitors to France is expected to be given a boost this year because of events linked to the 50th anniversary of the establishment of diplomatic ties between Paris and Beijing.

France continues to make efforts to woo Chinese tourists, whose spending power, means they are a huge boost to the tourism industry.

In January the Foreign Minister Laurent Fabius announced that Chinese visitors would get fast-track visas in order to make it easier for them to come to France.

6 ways to get a round Paris without public transport

On average, 8 in 10 of the normal services will run.

ON average, 8 in 10 of the normal services will run, a detailed timetable will be published on Monday evening.

The Eurostar has cancelled seven services – three from Paris to London, three from London to Paris and one from Brussels to London, but all other trains will run as normal. Find the full list of cancellations here

National and international rail services in and out of the capital will be severely disrupted, with 1 in 3 of the normal TGV services running and 2 in 10 of the normal TER services.

There will be some cancellations of flights, but only those arriving or leaving at Paris Orly airport. The civil aviation authority says that this will affect flights arriving or leaving between Monday evening and 6am on Wednesday – anyone with a flight to/from Orly booked between those times is advised to check with their airline.

Air France announced on Monday that it expected one in 10 of its short to medium haul flights to be cancelled on Tuesday due to strike action. The company said that it did not expect the strikes to cause any cancellations for long-haul flights.

The airline said that those whose flights are cancelled may be eligible for credit or full refunds. Air France is also offering to no-fee postponements for travel until February 7. Customers were advised to check their flight status prior to leaving for the airport via the Air France app or website.

As of Monday, the civil aviation authority (DGAC) expected operations to run normally on Tuesday at the Roissy-Charles de Gaulle airport, according to Le Parisien.

Many schools in the capital will be fully or partly closed for the day – the last one-day strike saw just under half of teachers taking part, and a similar turnout is expected this time.

Paris’s Hotel de Ville will be closed on Tuesday, so administrative appointments will have to be rescheduled, although city services such as bin collection will continue as normal. The Communist leader Fabien Rossel has called for town halls across the country to close in solidarity with the strikes, but the final decision is up to individual mayors. The arrondissements mairies, therefore, may be open as normal.

There will be demonstrations and marches across the country, including in Paris where a large turnout is expected. The march will begin in Place d’Italie at 2pm, marching towards Place Vauban where it is expected to end at around 7pm.