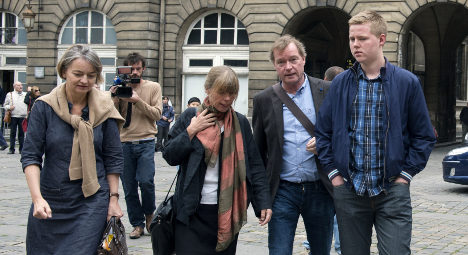 The 2008 murder of Susanna Zetterberg, a 19-year-old from Stockholm studying French and working part-time in a cafe in the French capital, caused widespread shock and disgust in France and Sweden after her partially burnt body was discovered near Paris.

Bruno Cholet, 57, was convicted of the kidnap and murder after a trial in September 2012, but he consistently claimed police had fabricated the evidence against him.

He was sentenced to life imprisonment but appealed the verdict.

His retrial will take place from May 13th to May 23rd at a court in Melun, a town outside Paris.

Zetterberg was last seen leaving a nightclub and entering a taxi in central Paris at around 4:45 am on Saturday April 19th, 2008.

Later the same day her partially burnt body was discovered in the Chantilly forest, about 50 kilometres (30 miles) north of Paris. She had been shot at least four times in the head and had her hands tied behind her back with a brand of handcuffs sold in sex shops.

Traced though files on unlicensed cab drivers and images of a man seen using Zetterberg's bank cards following the murder, Cholet was arrested six days after her killing.

Shortly after his arrest, a pistol, bullets, rubber gloves and handcuffs were found in Cholet's car, some of the material containing traces of Zetterberg's DNA, according to the prosecution case.

As well as having been charged five times for operating an illegal cab, the accused has a string of serious convictions, including three for rape and one for armed robbery.

At the original trial Zetterberg's mother, father and brother were seated in the front row, surrounded by their lawyers and a Swedish interpreter.

"We hope that maybe, finally, the truth will be told," the family's lawyer Jean-Yves Le Borgne told journalists outside the court at the time.

Zetterberg's mother Åsa Palmqvist told French media on the eve of the 2012 trial that she was convinced Cholet was guilty.

"The important thing is to convict him, to prove that it was him. I will never be able to forgive him," she said, adding: "We are not expecting him to confess."

Cholet's lawyers however said the accused continued to deny any involvement in the killing and claimed police had set him up by planting evidence.

"The investigation was based from the outset on his guilt," said defence lawyer, Luc Ravaz at the time of the original trial.