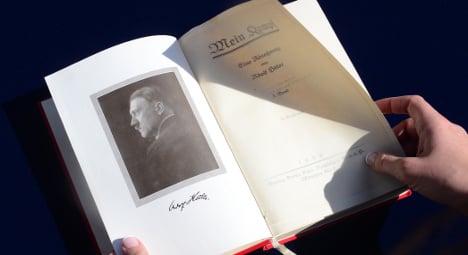 An early edition of Mein Kampf will now not be sold at auction after protests from a French anti-Semitism watchdog body. Frederick Brown/AFP

French auction house Pierre Bergé & Associés said on Wednesday it has withdrawn from sale a rare first edition of Hitler's "Mein Kampf" following a protest from a Jewish watchdog body.

The National Bureau for Vigilance against Anti-Semitism (BNVCA) had opposed the sale and had criticised the auctioneers for presenting Hitler's autobiography/manifesto, "as if it was just another work or art written by a poet or a member of the French Academy".

Zoummeroff, who is Jewish, said he had acquired his copy of "Mein Kampf" "to show what has existed, to document the despicable".

"Mein Kampf" is not banned in France in line with a 1979 court ruling that it constitutes a historical document which is indispensable for the understanding of the contemporary period.

The umbrella organisation of Jewish groups CRIF said the sale was "a form of moral indecency" and disrespectful to "the victims of Nazi barbarism" and had asked the minister Aurelie Filippetti to block the auction.

Aurelie Filippetti said the auction had to be barred out of “necessary in the light of history and morality".

Two copies of "Mein Kampf" which had been signed by Hitler were controversially auctioned in Los Angeles earlier this year and sold for nearly $65,000.