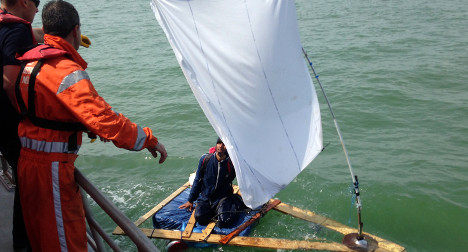 “I am going to keep trying my luck, by any means whatever,” said 33-year-old Asif Hussein Khail, who on Monday was plucked out of the sea by the coastguard as his raft – made from strips of wood with a bedsheet for a sail – floundered near the port of Calais.

Despair drove him to attempt the perilous crossing.

“I’m fed up, I’m exhausted, life is too hard here,” he told BFM TV news channel. “”I’ve been in Calais for 40 days but there is no water, no food, no hope, no opportunities.”

Hundreds of migrants from around the world gather in and around Calais, living in squalid camps as they wait for the chance to sneak into Britain, often by paying people smugglers to help them get on to lorries or trains or ferries heading for England.

“I only need €40 or €50 to pay someone to get me there “ said Khail, who has no passport and no visa for Britain. “Life is better over there, there are more opportunities.”

The French coastguard said the Afghan, from Kabul, would have had no chance of reaching the English coast because of the prevailing currents, and would also have been at great risk of being hit by one of the many large vessels crossing the world’s busiest shipping lane.

Khail was picked up three kilometres from the town of Sangatte, the site of a notorious refugee camp that once housed 1,500 migrants at a time, until its closure in 2002.

He was handed over to border police after medics examined him but was later released and is now free to try his luck again. He said that the only method he was not prepared to try was hanging on to the undercarriage of a truck.