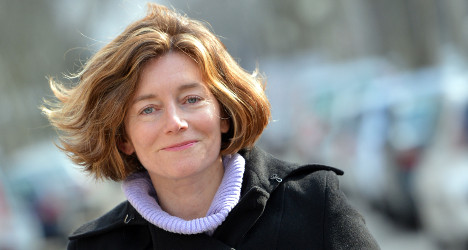 Natalie Nougayrède, the first woman to take the top editor's job at Le Monde, but is now the source of a editorial rebellion, reports say. Photo: Miguel Medina/AFP
To lose one editor may be regarded as a misfortune; to lose seven looks like carelessness – that is perhaps how Oscar Wilde might have adapted his famous quote to describe what is going at Le Monde. We take a closer look at the woman who is being blamed for the newspaper's latest crisis, which saw seven out of 11 editors resign this week.
Who is Natalie Nougayrède?

She is the first woman editor-in-chief of Le Monde, France’s left of centre newspaper of reference. She was appointed a year ago after the previous top editor, Erik Izraelewicz, had a heart attack in the newspaper’s offices and died. How did she get to be Le Monde’s top editor?

She was so good at her job that in 2005 she won the Prix Albert Londres, France's equivalent of the Pulitzer prize, for her coverage of the Beslan siege and the Chechen conflict. She later hung up her foreign correspondent boots and became the paper’s Paris-based diplomatic correspondent.

Her feisty style at one point so irked the then French foreign minister, Bernard Kouchner, that he had her evicted from an ambassadors' function.

With that impressive CV, she walked into her current position in 2013, despite never previously holding any editorial or management position at the paper.

Under Le Monde’s byzantine rules for appointing someone to the top editing job, Nougayrède was voted in by 80 percent of the staff, a sign that she was well liked.

Following her election, she told the newspaper’s assembled journalists that she would strive to “maintain standards of excellence” and urged staff to face the “ongoing challenges of the digital age”. Why is she making the news instead of writing the news?

Her honeymoon period at the helm of Le Monde, which was founded in 1944, did not last long. Staff soon began to complain of a lack of communication and an apparent lack of direction from the boss.

In February this year, Nougayrède announced plans to combine the paper’s print and web staff, affecting more than 50 jobs.

Staff said they had not been consulted and were worried by news that employees who refused to switch jobs would be made redundant.

Things came to a head this week, when seven out of the 11 senior editors resigned. They said that their lack of confidence in editorial management was stopping them doing their work properly.

A source at the paper said it was "exhausting" working under a management they said never communicates, takes decisions without consulting senior editors and fails to respond to simple organisational requests.

Nougayrède has survived wars. Can she survive this crisis? She has held crisis meetings with the staff in the wake of the mass resignations, and has made soothing noises, saying she has taken note of the “pressure” her team has been under and promising to quickly come up with solutions to ease the crisis.

But her fate ultimately depends of the continued backing of the conglomerate of three businessmen, Pierre Bergé, former partner of fashion designer Yves Saint-Laurent, Xavier Niel, a telecoms tycoon, and banker Mathieu Pigasse, who bought the paper in 2011.