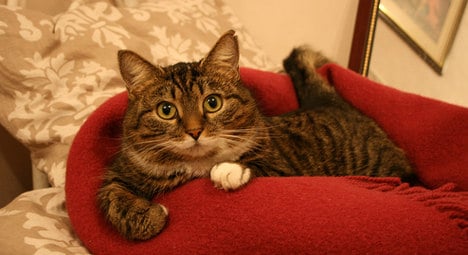 Frenchman kills cat in washing maching after the pet knocked over his statue of Buddha. Photo: I'makittycat/Flickr

The forty-year-old was at his home in the town of Briec in the western region of Brittany last February when the cat bashed into and broke the statue of the founder of a religion that encourages loving kindness towards all beings.

Furious, the owner grabbed bis pet and threw it into the washing machine, which he then switched on for a 40 degree cycle, according to Ouest France newspaper.

A neighbour upstairs heard bizarre noises. When she phoned the man to ask what was going on, he replied that he had killed the cat and had put its body along with the broken Buddha into a rubbish bag, the paper said.

The neighbour alerted police and animal welfare organisations. The man was due in court in the Breton town of Quimper. Three animal welfare groups, including the Brigitte Bardot Foundation, have taken out civil suits against him.

In February, a cat torturer who caused outrage in France after videos were posted online showing him throwing a kitten high into the air, was sentenced to a year in prison.

The video, which has since been removed from YouTube, sparked furore after thousands of viewers were outraged after seeing the man throw Oscar as high as he could against a block of flats.

Meowing, the little ginger and white kitten is then seen falling four or five metres away. Oscar survived the attack and made a good recovery.