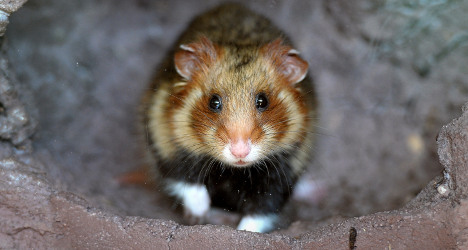 France has been failing in its duty to protect the 'Great Hamster of Alsace', according to the EU, so it has a launched a new €3million preservation programme. Photo: Frederick Florin/AFP

France has launched a preservation programme to save from extinction the Great Hamster of Alsace, the only wild hamster in western Europe whose numbers have been reduced to just a few hundred by motorway projects, industrial-scale farming and suburban sprawl.

France has been criticised by the European Union for failing to do enough to protect the endangered rodent, Cricetus cricetus, which at 25 centimetres long is much larger than its domesticated cousins.

This week authorities in the region of Alsace launched “Alister” – Alsace Life Hamster – a €3million programme that aims to boost the current estimated population of between 500 and 1,000 to around 1,500, which is seen as a viable number for the continuation of the species.

The goal is to boost the image of the black-bellied rodent long seen as a pest by farmers, and to join up the 14 zones where it is currently found by creating passageways under some of the myriad roads that have been built in the eastern Alsace region in recent decades.

Local farmers have promised to cultivate crops that the round-eared hamsters like – such as wheat or alfalfa – on part of their land.

"The aim is to find innovative… practices to preserve the animal without harming farmers' activities," the regional council said in a statement.

Great Hamster numbers have continued to decline despite the rodent being placed under legal protection since 1993 and a previous programme put in place in 2007 to save the nocturnal creature, which hibernates for six months and spends most of its life alone.

Rampant urbanisation has contributed to eroding the rodent's population, and the hamster currently lives in just 14 zones in Alsace criss-crossed by busy thoroughfares.

In 2011 France came in for criticism from the European Court of Justice which ruled that it was still not doing enough to protect the rare species.

It said it must modify its agricultural and urbanization policies to protect it, or face heavy fines.