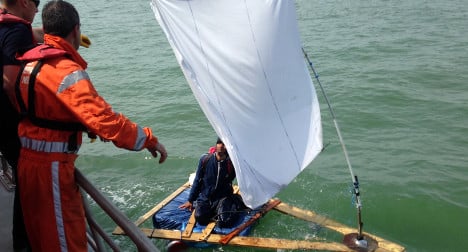 French coast rescuers support a 23-year-old Afghan trying to cross the Channel on a makeshift raft using a bedsheet as a sail. Photo: SNSM/AFP

The youth, who had fashioned the raft with strips of wood and canvas, with a table leg serving as a mast, was rescued off Sangatte near Calais, an official said.

The man, who had started developing hypothermia, "was first disappointed and then glad at being rescued," said Bernard Barron, the head of the coast rescue service in Calais.

"It's very rare that rescuers intervene at sea to pick up migrants," he said, as human traffickers did not normally allow people to travel alone.

"Because of the strong currents and winds, it would have been impossible for him to cross" to Britain, Barron said.

According to local officials, there are about 400 illegal immigrants at any time in northern France hoping to enter Britain illegally.