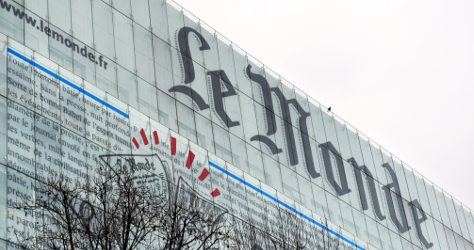 "A lack of confidence in and communication with editorial management prevents us from fulfilling our roles as chief editors," seven of the newspaper's senior editors said in an internal letter to management.

They said they remained available to help out until a new team is appointed to replace them, to avoid damaging the daily running of the newspaper.

"We have realised that we are no longer able to assume the tasks entrusted to us, and that's why we are resigning from our respective posts," they added.

A source at the newspaper told AFP it was "exhausting" working under a management they said never communicates, takes decisions without consulting chief editors and fails to respond to simple organisational requests.

"They don't work collectively, we never know what is going on," the source said.

"After a year-and-a-half, it's not working out."

The editors' gripes centre on Natalie Nougayrede, the newspaper's managing editor, whom staff say is "very difficult to talk to", according to the source.

Nougayrede took up her post in March last year, succeeding the highly respected Erik Izraelewicz who died suddenly of a heart attack in his office in November 2012.

Le Monde crisis: The woman blamed for the mass resignations Le Monde, a centre-left daily founded in 1944, is France's newspaper of record and recently played a prominent role in the coverage of the revelations of former NSA contractor Edward Snowden.

Le Monde is not the only French newspaper in turmoil at the moment. In February the head of the left wing Liberation paper quit after staff revolted over a plan to turn it into a "social network".

Nicolas Demorand quit Liberation after a surprise plan by owners to try to turn the newspaper around sparked fury among its journalists.

Demorand, Liberation's publisher since 2011, said he had the "full support" of the newspaper's shareholders but that he had become a polarising figure.

"I am taking this decision because I believe we must unblock the situation Liberation finds itself in, with a clear confrontation between the editorial department and part of the shareholders," he said.

Started by French philosopher Jean-Paul Sartre in 1973, Liberation has been a mainstay on French newsstands – especially in left-leaning Paris.

In 2013, Liberation lost more than a million euros ($1.3 million) as sales plummeted 15 percent – the biggest slide among French newspapers.

Its two main owners, businessman Edouard de Rothschild and real estate developer Bruno Ledoux, have warned they will no longer finance the paper unless a "viable project" is accepted to turn it around.

The owners have presented a plan to create a "social network" using the newspaper's brand and to convert its offices into a cultural centre featuring a cafe, TV studio and business area to help start-ups.

Liberation's staff have rejected the project, saying journalism must remain its main focus