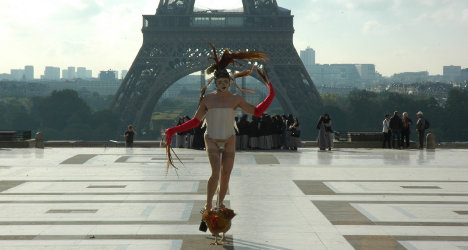 South African artist Steven Cohen dances around the Place du Trocadero with a cockerel tied to his penis. But was it art? Photo: Quentin Evrard

But the criminal court imposed no penalty on the artist, 51-year-old Steven Cohen, noting that no complaint had been filed against him and that he had not engaged in sexual acts.

Cohen was arrested last September after the performance in a busy public square near the Eiffel Tower.

Sporting platform shoes and an outlandish costume including feathers on his fingers and a headdress made of a stuffed pheasant, he danced for ten minutes with his penis attached to the rooster, before police stepped in.

Cohen was arrested and spent nine hours in a police cell for charges of indecent exposure. His lawyer later slammed the police who arrested Cohen for treating him like a “homosexual prostitute”.

"I think the victim is art," Cohen said after the verdict, noting that his performance was interrupted before it could conclude.

"I'm not saying I'm going to, but my desire is to complete what was incorrectly halted by the authorities," he said.

"I'm frustrated because it's almost like being found guilty but not being punished. It's like saying 'we are right but we are not going to do anything to you', which for me is a double injustice," Cohen said.

"What I did was art (that) had nothing to do with sexuality," he had told the court, adding that no one – even a group of passing nuns – had complained about the performance.

“It was not the penis that was the focus,” Cohen had told the court. It was all to do with the expression of his identity – “a white male, homosexual and Jewish”, he told the court.

Cohen argued his performance was not offensive because none of the passers-by who stopped to view his bizarre act filed a complaint with police.

“No one complained, not even the group of nuns who walked by,” he pleaded. Cohen has argued that a free country like France should not be throwing its artists in prison.

“If you condemn me it will be bad for France,” Cohen added, but it seems the judges did not agree.

Cohen's performance was captured in the video below.

WARNING: This video contains nudity that some may find offensive