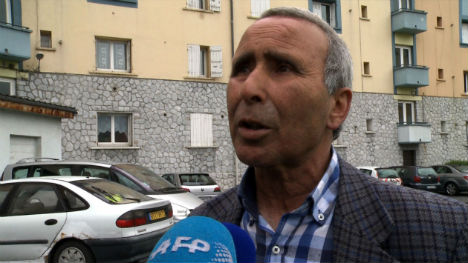 Describing Sala Bouhabila as a gentle man who enjoyed partying and clubbing, they said the 37-year-old — whom the interior ministry said was detained in Turkey in March in a bus taking a group of people to Syria — had travelled abroad to do humanitarian work.

"I don't believe this story, I don't believe that he went to do jihad, we would go out partying together to nightclubs, he's not at all radical," Maydime, one of his friends, said in the Alpine city of Albertville where Bouhabila lived.

His father told AFP he had gone abroad for humanitarian work — a claim echoed by his friends.

"He doesn't go to the mosque every day, he's innocent, he's a good man, he speaks to everyone, this is a mistake," Ferhat Bouhabila said at the foot of the building where he lives.

Tewfik, another of Bouhabila's friends, said he was "a partygoer, he went out, he lived like everyone else, he's got nothing to do with all this."

But according to the interior ministry, the suspect is linked to "members of the radical Islamist movement who were involved in recruiting people to integrate jihadist networks going to Afghanistan and Syria."

He was handed over to France by Turkey on Wednesday evening, and was sent back to his home country of Algeria the following morning — the first immediate eviction from France of a foreigner allegedly involved in jihadist networks.

According to official figures, some 285 French nationals are currently fighting in Syria.