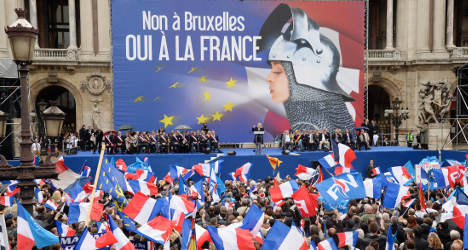 National Front party leader Marine Le Pen rallied her supporters in her traditional May Day march on Thursday in which she urged the French people to vote for her anti-EU party in the upcoming Euro elections.

Police said around 5,000 supporters of the far-right party turned out to hear Le Pen issue her rallying call.

“The nation is confronted by the European Union’s noxious actions on all fronts. We need to recover our freedom and sovereignty and ensure the prosperity and security of our people and our country,” she said.

“We’re here to remind the French people, they have to act on May 25th.”

The rally was briefly interrupted by members of self-proclaimed “sextremist” group Femen. Two topless activists with “fascist epidemic” and “down with the fascist union” painted on their chests, turned up at the march as it was about to set off from the Palais Royal in central Paris.

“We will not allow Europe to become a fascist union. Stop the epidemic,” read a tweet from the group’s account, shortly after the stunt.

Le Pen dismissed Femen as a “hysterical leftist cult” after she laid a wreath at the statue of Joan of Arc – the party’s patron saint.

Over in the east of Paris, trade unions and workers held their own traditional May Day rally, calling for an end to the French government’s policy of austerity. (“Hollande has betrayed the people” reads the placard held up by left-wing protesters in Paris. Photo: Alain Jocard/AFP)

According to unions, around 210, 000 left-wing marchers took to the streets of France to show their opposition to French Prime Minister Manuel Valls’s cuts €50 billion programme, although police put that figure at more like 100,000.

Thierry Lepaon, secretary-general of the CGT union complained that it was “hard to measure the difference” in policies between François Hollande and his right-wing predecessor Nicolas Sarkozy.

“We have the impression that it’s just a continuation of the previous [policies]: no to wages, no to employment, yes to the industrial decline of our country”.

Jean-Claude Mailly, head of the Force Ouvriers condemned the government’s much-vaunte “Responsibility Pact” which is aimed at boosting employment by cutting payroll charges for companies.

“We continue to condemn the pact of responsibility, the government is wrong in terms of its economic policy. Employers will never make commitments on jobs or pay. What we want is to come out of austerity,” he said.