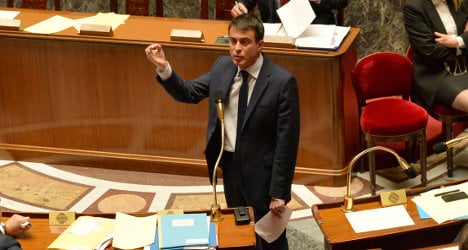 French PM Manuel Valls speaks to lawmakers in the National Assembly on Tuesday to convince them to back his €50 billion cuts programme. Photo: Eric Feferberg/AFP

France's reshuffled government scraped through its first major test Tuesday when parliament's lower house voted through a controversial programme of economic reforms despite a wave of dissent within the ruling Socialist party.

President Francois Hollande and Prime Minister Manuel Valls have made a business-friendly programme of reductions in payroll and income taxes the centrepiece of their plan to lift the country out of the economic mire.

But the strategy has provoked deep misgivings within their own party, with lawmakers questioning the morality and economic logic of the proposals to cut €50 billion ($70 billion) from state spending over the next three years, partly through freezing a range of welfare benefits and the pay of most public sector workers.

As such, all eyes were on a consultative vote held in the National Assembly on Tuesday evening, which eventually saw 265 lawmakers vote the plan through, 232 cast their ballots against it and 67 abstain.

"It was essential… that there be a vote that showed that the majority, beyond all the debates, approved this project," he told parliament.

But the economic plan was hard won and 41 Socialist lawmakers abstained from voting, highlighting the deep unease within the ruling party over the plan.

Valls, who replaced former prime minister Jean-Marc Ayrault at the end of March after the Socialists suffered a drubbing at local elections, had tried to soothe the rebel left of his party on Monday.

He unveiled a series of concessions on the spending cuts that will notably ensure some five million pensioners are no longer affected by the welfare freeze. But these failed to appease some who are against the government's so-called Stability Programme.

Often compared to former British premier Tony Blair, Valls is a controversial figure within the Socialist party – his hardline stances on immigration and crime led to frequent clashes with fellow ministers during his
time as interior minister.

But he is close to Hollande and the president has given him unequivocal backing over a cuts package which aims to ensure France brings its budget deficit into line with European Union rules while freeing up funds for the planned tax and payroll cuts.

The strategy reflects a widely held perception that France's corporate sector has become uncompetitive and that the heavy tax burden on employers is acting as a brake on job creation.

This is seen as making it much harder for the economy to gain any momentum as it struggles to emerge from years of recession and stagnation which has left the country with record unemployment.

Valls's most important concession to the rebels in his party was a pledge that the welfare freeze would not be applied to pensioners living on less than €1,200 a month – a measure which will cost an estimated €300 million to deliver.

He also agreed to resume inflation-linked pay rises for the lowest-paid public sector workers and said he would proceed with a revaluation of the minimum level of state income support for the long-term unemployed from this year, rather than delaying it until 2015.

The premier has however insisted on maintaining the overall target of €50 billion in cuts between 2015 and 2017, so the cost of the concessionswill have to be recovered elsewhere.