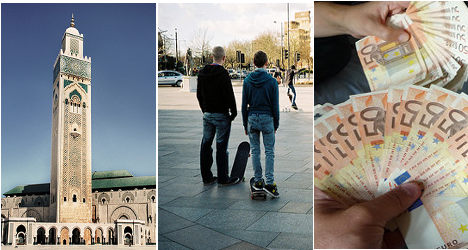 France’s crop of 14 far-right mayors have busy been during their inaugural month in office.

March's historic local election victories for 11 National Front mayors guaranteed some changes were coming and those elected into Town Halls have wasted no time.

There were widespread worries on the French left and centre that the election of representatives of the increasingly mainstream far-right would translate into xenophobic, austere or even openly racist policies.

Some would argue the changes made by far-right mayors in their first month in power offer proof they were right to hold those fears.

Take a look through this list of the most controversial far-right leadership decisions and judge for yourself.

No anti-slavery ceremony: The National Front mayor of Villers-Cotterêts in Northern France riled up local activists when he announced the town would not hold a commemoration for the abolition of slavery. Mayor Franck Briffault rejected the “continual self-inflicted guilt” of the event which has been held every year since 2007.

Mayors get pay hikes: One of the first orders of business for two National Front mayors in the south of France was to give themselves a pay rise. Mayor Philippe de La Grange in the town of Luc en Provence is paying himself €2,404.42 a month, which is about 15 percent more than his predecessor. The mayor of Coglin, Marc-Etienne Lansade, also saw fit to bump his pay by nearly 15 percent.

Mosque opposition: Muslims in two National Front-led towns are incensed by their local mayor’s efforts to quash two religious projects. Mayor Cyril Nauth in Parisian suburb Mantes-La-Ville has declared himself “hostile” to a planned Islamic prayer room, which was approved by his Socialist party predecessor. The mayor in the Riviera town of Fréjus, David Rachline ran on his opposition to a mosque there which is already under construction. He’s called for a referendum on the matter.

European flag disappears: The anti-EU sentiments of the National Front have also popped up in symbolic ways. On orders of Fréjus, Mayor David Rachline the gold star-adorned European flag was removed from the front of Town Hall.

Human rights group evicted: Human rights activists got the boot from their city-owned offices after new National Front mayor Steeve Briois was elected in northern France. The Hénin-Beaumont mayor said the League of Human Rights, which opposed his candidacy, had become “politicized” and thus was no longer legally entitled to public subsidies. No halal lunches: Anger (and support) ricocheted on Twitter after National Front-backed Mayor of Béziers, Robert Ménard announced “there would be no halal meals in municipal cafeterias,” echoing a statement from party head Marine Le Pen. But it later emerged schools in Béziers don’t offer halal meals, rather it has non-pork options for Jewish and Muslim pupils.

Drops in taxes and salaries: Some mayors have also announced cuts to the local residence tax (taxe d'habitation), but have not said how they plan to make up for the lost revenue. The northern city of Hénin-Beaumont will see a 10 percent tax cut and a “vast savings plan.” Smaller cuts are on the table in Villers-Cotterêts and Beaucaire, which also saw a “symbolic” cut town in councillors’ pay.

Kids’ curfew: Under 13s will be forbidden from being outside alone at night in the town of Béziers under a municipal decree from National Front-backed Mayor Robert Ménard. The summertime prohibition targets certains areas, including higher-crime, lower-income zones referred to as “sensitive neighborhoods” in French.