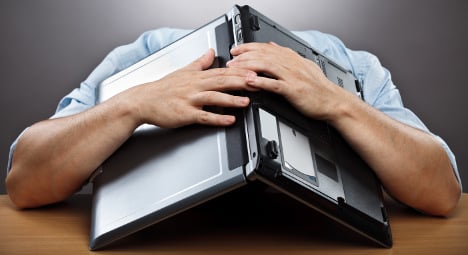 English jargon is invading French work places, but how are the French receiving it? Photo: Shutterstock

If one of the immortals at the Académie Française or the French “language police” as they are often referred to, stepped inside the office of any big company in Paris you could imagine them uttering the odd “Sacré Bleu!”.

While the Academie Française has put up a valiant resistance to the invasion of English over the years, one place where their defences have failed to hold is in the workplace.

Anglos have long complained about the rise of jargon in their offices, so our first instinct would be to spare a thought for the French, who have to put up with words like “brainstorming”, “benchmarking” and “bullet points” being thrust upon them.

However pity is not the correct emotion it seems, because young French professionals are enthusiastically, making use of the jargon to suit their needs.

“When the French use an Anglicism at work they have the impression it adds a bit of glamour to what they are saying,” Alexandre des Isnards, author of “Dictionaire de Nouveau Francais” tells The Local.

Des Isnards says around 50 percent of the content of his new book, which looks at the thousands of new words used in France, features Anglicisms. Various experts say the use of English or Franglais jargon in the work place will continue to increase dramatically over the coming years.

“The French have a special way of integrating English into French. We don’t do it like other languages. We will often change the spelling of English words to suit us. This is seen as having a certain creativity about it.

“Young French people these days are pragmatic. They know the importance of speaking English. These young professionals are not going to try to stop something they know will happen anyway.”

“They are a generation that knows the importance of publicity and marketing and that is where a lot of these words have come from.”

However the chief reason why English is not creeping, but barging its way into the French workplace is due to the pressures of modern professional life.

“When people are under pressure at work etc they say the first word that comes into their mind. They don’t stop and analyse it and think what word they should use.

“With new technology, people are under pressure to respond more quickly and often an English word or phrase is the easiest.

“Instead of trying to explain that they are busy, some French people would just use the verb ‘overbooker’.”

Despite this, some French language experts decry the use of English or Franglais, when often they say there is really no need.

“When there is a possible French translation I admit that I find it completely ridiculous [to use an English version],” respected French linguist Alain Rey told AFP.

Rey believes that in reality the French end up using a skewed version of English that can end up being different from what the original word means and can therefore lead to confusion.

“Sometimes English is used simply because it’s more efficient. For example it’s quicker to say “ASAP” (As soon as possible) than the French version (Aussi vite que possible or “urgent”).

“It’s not ridiculous it’s just inevitable with the way the world of work is these days,” he says.

So what are the Anglicisms your most likely to hear in a French office? Here’s our top 10.

ASAP – The acronym for “as soon as possible”, which is replacing French words “urgent” or “tout de suite”, as it can appear more polite and succinct.

Brainstorming –  It’s quite possible you’ve heard “On se prévoit un p’tit brainstorming” in France, basically “let’s have a little brainstorming”. The word has long been detested in Anglo offices and it won’t probably won’t be long before there’s a backlash in France.

Open Space  – This is all the fashion these days in French offices, although like everywhere “un espace de travail ouvert” can have its problems.

To do list – When French employees arrive at work they will often “faire un ‘to-do list’, of which the first thing will, if we are sticking to stereotypes, will be to grab a coffee and have a chat.

Conf call – Conference call in English is shortened in its Franglais version to just ‘conf call’ but it means the same, and is easier to say than “reunion de travail à distance par telephone”, which is the literal French translation. You’ll often hear French say “j’ai un conf call” or even just “j’ai un call”

Bullet Points: We can probably point the blame at Microsoft PowerPoint for the wide use of this term by French workers. “T’as prepare tes bullet points?” (Have you prepared your bullet points?) is a great example of how English jargon his mixed with French.

Deadline: Although the French have their own version for this word in “delai” the English term “deadline” seems to be the most popular. Perhaps because it contains a little bit more menace with the word “dead” in there.

FYI – This would be PTI in French or PVI (Pour Ton/Votre Information) but it is the Anglo version that is used the most by French people to keep their colleagues up to date with what is going on.

Workshop – Instead of hearing your French colleagues talk about the “Seminaire de Formation” that they are going on next week, they are more likely to simply say “workshop”.

Burnout – This syndrome is all the talk in France at the moment with new figures showing more and more French workers are suffering from the condition, that in French could be described as “syndrome epuisement”.