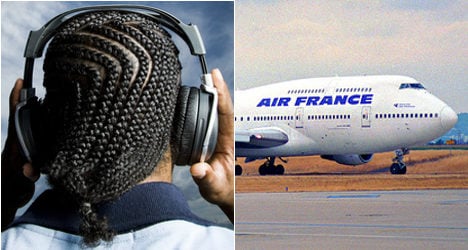 Did Air France suspend a black employee over his dreads? That's what he claims. Photo: African American/Shutterstock, Aero Icarus/Flickr

A black Air France flight attendant has accused France's national airline of discriminating against him because of his hair.

According to Air France, employee Abdukadar Touré, 40, the trouble began when the airline refused to allow him to fulfill his role as a flight attendant on several trips, because of his shoulder-length braided hair, which is tied back behind his head.

After taking note of boss's complaints Touré says he tried styling the braids in several different ways in order to meet Air France rules on hair length and volume, but alas it was to no avail. In 2012 he was suspended from work for five days because of his hair. In the end the only hair style he says he found that pleased his employer was a straight hair wig. So this week he took his case before an employment tribunal in the Paris suburb of Bobigny, arguing he was the victim of discrimination.

“This man was forced hide the nature of his hair, they don’t want frizzy hair on their airplanes!,” Touré’s lawyer Houria Amari argued before the board, Le Parisien reported.

Touré, who is currently working a desk job for the airline, wants to be reinstated as a flight attendant and is seeking €50,000 in damages. He claims the struggle has pushed him into depression.

Watchdog group SOS Racisme is also backing the lawsuit and is seeking symbolic damages of €1.

For its part Air France says it the accusations of racism are "shocking". The company argues the whole controversy could have been avoided if Touré had simply followed company policy.

“It’s shocking,” company lawyer Baudouin de Moucheron told the tribunal. “The employee handbook forbids long hair on men, this is not a question of braids and applies to the entire male population of Air France."

The tribunal is expected to make its decision on June 10.