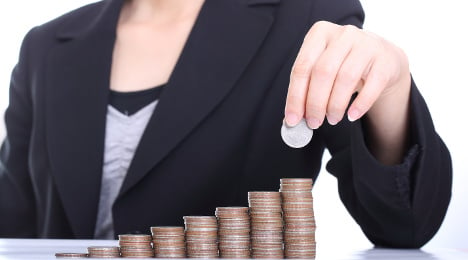 Hoping for a pay rise in France in 2014? You'll have a tough job. Photo: Shutterstock

Getting a pay rise in France can often be a long and difficult task that requires plenty of patience, but in 2014 it might not even be worth asking in many companies.

A new study by the firm consulting firm Deloitte revealed that one out of two French companies has cut its budget set aside for pay rises in 2014.

“It seems the economic situation [in France] will for the first time since 2008 have an impact on the budget for pay rises,” Deloitte concluded after completing its survey of 121 companies and the salaries of 650,000 individuals.

According to the study, the average provisional budget for wage increases in France will be around 2 percent this year, compared to 2.3 percent in 2013.

Before the 2008 economic crisis the budgets for salary increases were around the 3.3 percent mark.

Things look particularly bleak for executives and senior managers in 2014 which could see their pay cut by 0.3 percent, according to Deloitte.

However your chances of getting a pay rise could depend on the size of company you work for, with those in the bigger firms having more hope of a rise.

Deloitte found that companies with more than €500 million of turnover routinely offer increases of between 2 and 2.2 percent, while companies of immediate size (less than €100 million turnover)  offer rises from around 1.9 percent.

However where there is a will there is a way. Thanks to French recruitment firm Robert Half The Local has some key tips for how to go about getting a payrise in France.

1.       Choose the right moment: Obviously that’s easier said than done. But the basic rule is to approach your manager when he is most receptive. And remember French working culture is to respect the hierarchy, so don’t go above your line manager to try to convince his/her boss that you merit a 15 percent pay rise.

2.       Don’t ask too often: Robert Half’s Managing Director Oliver Gelis tells the Cadre Emploi website that it’s only reasonable to ask for a pay rise once a year, unless you have changed jobs. So make the most of your shot at it.

3.       Overachieve: Gelis also says that you’ll need to surpass your targets if you want to have any hope of getting a pay rise. “It is useless to ask for a rise if the objectives have only been reached. They must be surpassed for you to qualify for an increase,” he said.

4.       Be realistic: These are tough times for some companies in France so it’s worth looking at what new recruits in your position are being offered in terms of wages so you know what to expect. Also consult the specialist press and recruitment sites to try to get an idea of what is reasonable.

5.       Are you indispensable?: Gelis says that from an employer’s point of view they will ask the question: “Why increase your salary rather than that of another employee?” “The bosses will be more open to increase the salary of those who are essential to the development of the company,” he said. So you’ll need to collect evidence to present it to your boss to show why you deserve a rise.

6.       Be patient but pushy: The time between you asking for a pay rise and you being given the green light can be weeks if not months in France. So you’ll need to be patient but pushy. If you do get it, it should be backdated, so there shouldn’t be too much need to stress if its taking a while. Well, only if you get your wish, of course. However French managers can be notoriously slow to get back to you on issues such as this, so when they say ‘I’ll get back to you”, make sure you say “when”.

7.       And in the case of a no?: “Sorry the budget for pay rises has been frozen or cut…” may be a common response from your managers in 2014. If that’s the case then Gelis says it’s worth trying to negotiate an increase that kicks in at a later date or on a sliding scale. “Commit to ambitious and measured goals that could be rewarded with a bonus,” the consultant says.

8.       What else can they give you: French company’s could reward you in other ways. Asking for extra holidays would not be laughed at, neither would a request for restaurant or gift vouchers that are common in French firms.

Tell us about your experience trying to get a pay rise in France. Did you succeed?