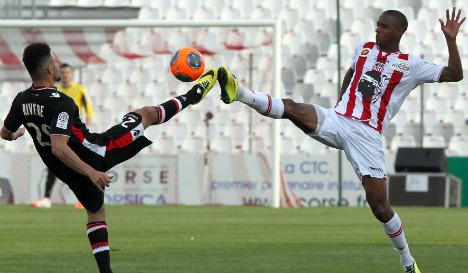 All the goals came in the second half at the Stade Francois-Coty as Dimitar Berbatov continued his impressive recent form by scoring twice for the visitors before Gadji Tallo got one back.

Berbatov then set up another goal for Geoffrey Kondogbia, while Lucas Ocampos added the fourth late on as Monaco made it four successive league wins to all but guarantee second spot and automatic qualification for next season's Champions League group stage.

"We were not great in the first half and Ajaccio caused us problems because they wanted to win the game," said Monaco coach Claudio Ranieri.

"The state of the pitch didn't help. We tried to adapt to our opponents and we played well in the second half and scored four goals. Berbatov is a great player."

Ranieri's side are now 11 points clear of third-placed Lille, who have just four matches remaining, including Sunday's home meeting with Bordeaux.

They are also seven points adrift of PSG, who must win away to relegation-threatened Sochaux on Sunday if they are to celebrate clinching the Ligue 1 crown this weekend.

Laurent Blanc's men will therefore have to beat the all-time record points tally in the French top flight in order to become champions this weekend, which says much about how well Monaco have performed in their first season since winning promotion back to the top flight. "For us, making PSG wait to win the title was not the objective because that was decided a long time ago," said Ranieri.

"We have 75 points, which is great but I always want more. It's important for our pride, especially as we have been playing without (the injured Radamel) Falcao since November."

It was not a vintage performance from the principality club in Corsica against opponents whose relegation was confirmed last weekend, and there was little between the teams in the first half.

Home goalkeeper Guillermo Ochoa saved well from a Joao Moutinho volley early on, while Danijel Subasic was called into action to deny Dennis Oliech at the other end.

Ivorian striker Tallo shot narrowly wide for the hosts shortly after the restart, but the opening goal arrived moments later when Moutinho played a left-wing corner short before getting the ball back and crossing for Berbatov to head home from close range.

It was his seventh goal for Monaco since joining the club from Fulham at the end of January and it was followed by another in the 74th minute.

This time the Bulgarian finished coolly from close range after latching onto a pass from James Rodriguez that undid the home offside trap.

Tallo got one back almost immediately, lashing the ball high into the net following a low cross from the right by Paul Lasne, but Monaco made sure of the victory with two late goals.

First Berbatov turned provider for Kondogbia to curl the ball home from 25 yards for his first Ligue 1 goal, and then Ocampos volleyed home a cross from fellow substitute Nabil Dirar in stoppage time.

Elsewhere, fourth-placed Saint-Etienne kept alive their outside chances of Champions League qualification by winning 2-1 away to Evian, but Valenciennes are all but condemned to relegation following a 1-0 loss away at French Cup finalists Guingamp.

The northern side, who were promoted to Ligue 1 in 2006, are now nine points adrift of safety with only three matches remaining and are set to swap places with Metz, who won promotion back to the top flight after a six-year absence earlier on Saturday.

Montpellier and Nice appeared to secure their top-flight survival by beating Toulouse 2-1 and Reims 1-0 respectively, while Rennes and Lorient drew 1-1 in a Brittany derby.

On Friday, Marseille's hopes of qualifying for Europe were dealt another blow when they could only draw 1-1 away to Nantes.