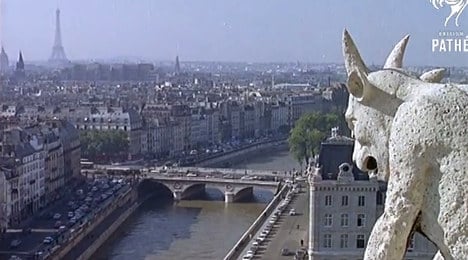 A view over Paris taken from a British Pathé film about the city in the swinging 60s.

From mini-skirts to major riots and a traffic free Champs Elysées to the city's Metro system, (yes, it looks like it was standing room only back then as well) this selection will help you look back to what life was like.

"Paris, the city of gaiety. Gay by day, gay and bright by night. So come down from the clouds and breathe in some of the atmosphere in a 24 hour jaunt around a city that takes your breath away."

These is how the first video from British Pathé describes Paris in the 60s. The "24 hour jaunt around the city" is where we start the gallery, before moving ontothe 1968 riots, a look inside a Paris nightclub and a peek back at the fashion styles back then.

Click on the link below to enter the video gallery.

Paris in the swinging 60s: The top six video clips