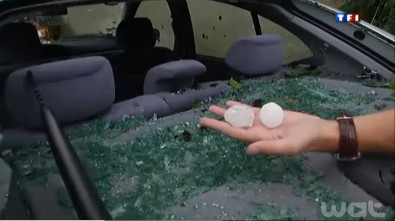 This file photo shows the aftermath of a hailstorm in France in 2013. On the night of April 24, 2014 several Normandy villages were hit by a surprise hailstorm. Photo: screengrab WAT TV.

A few hours later Pascal Laleman, the mayor of the little village of Auvillars, found his garage and basement blocked by a two metre-high drift of hailstones.

In the village of Bonnebosq, near the town of Lisieux, 10 houses were left damaged by flooding from the storm..

“It came so quickly,” one villager told Ouest-France. “It was over in around 10 minutes, no more. The water came down like a torrent. We have never seen anything like it before".

Local authorities said they would report the incident as a “natural disaster”, which would enable those affected to get compensation from the state.

The photo below from the Ouest-France news site shows the wall of hail that the left garage of one home completely blocked.